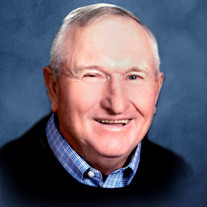 Allen Eugene Klosterman, age 71, of Seymour, passed away unexpectedly on the morning of Wednesday, May 26, 2021, at his home on the farm. Mr. Klosterman was a life-long member of Emanuel Lutheran Church, Dudleytown, where he held numerous offices. Allen was a life-long, self-employed grain and livestock farmer. The Klosterman family are proud recipients of the Hoosier Homestead Centennial and Sesquicentennial award. He was proud of helping build their house on the farm, as well as his kids' homes next door. Allen treasured spending time with his family. He loved attending his grandchildren’s sporting events and watching them show livestock. Butchering hogs annually with his family became a cherished tradition. He always enjoyed riding around with his wife, Janet, looking at their crops. He loved playing cards with family and friends and enjoyed his garden. Allen was on the Jackson Washington Volunteer Fire Department, enjoyed Lutheran Men’s Dartball League, and he also was involved with the Jackson County Pork Producers and Dairy Association. He served in the United States National Guard from 1969 to 1975. Born on March 13, 1950 in Seymour, he was the son of Victor and Melba (Hackman) Klosterman, both of whom preceded him in death. On February 7, 1976, at St. John’s Lutheran Church, Sauers, he married the love of his life, Janet Steinkamp, and she survives in Seymour. Allen and Janet’s children are: Andrew (Rachel) Klosterman of Seymour, Cindy (Chuck) Hobson of Seymour, and Matthew (Kelly) Klosterman of Seymour; one brother, Leon (Kay) Klosterman of Seymour; two sisters: Lois (Henry) Wischmeier of Columbus, and Rhonda (David) Eggersman of Seymour; nine grandchildren: Jenna Klosterman, Mallory Klosterman, Ben Klosterman, Hailey Hobson, Alex Hobson, Reed Hobson, Lindsey Klosterman, Olivia Klosterman, and Kate Klosterman; one sister–in–law, Jean Minneman of Indianapolis; two brothers–in–laws: Bernard (Barb) Steinkamp of Brownstown, and Stanley Steinkamp of Brownstown; as well as several nieces and nephews. Besides his parents, Allen was also preceded in death by his in-laws: Benjamin and Adella Steinkamp; one sister, Linda Schafstall Wischmeier; and four brothers–in–law: Jack Schafstall, Waldo Wischmeier, Lynn Steinkamp, and Dennis Steinkamp. Funeral services for Allen Eugene Klosterman will be conducted at 11:00 a.m. on Monday, May 31, 2021, at Emanuel Lutheran Church, Dudleytown, with Pastor Ken Davidson officiating. Friends may call from 12:00 p.m. to 4:00 p.m. on Sunday, May 30, 2021, at Spurgeon Funeral Home, Inc., Brownstown, and from 10:00 a.m. until the time of the service on Monday at Emanuel Lutheran Church, Dudleytown. Interment will follow at Emanuel Lutheran Church, Dudleytown Cemetery. Memorials may be given to Emanuel Lutheran Church, Dudleytown or Donor’s choice. Online memorials and condolences may be given at www.spurgeonfh.com

Allen Eugene Klosterman, age 71, of Seymour, passed away unexpectedly on the morning of Wednesday, May 26, 2021, at his home on the farm. Mr. Klosterman was a life-long member of Emanuel Lutheran Church, Dudleytown, where he held numerous offices. Allen... View Obituary & Service Information

The family of Allen Eugene Klosterman created this Life Tributes page to make it easy to share your memories.

Send flowers to the Klosterman family.