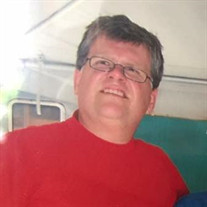 Andy Reynolds, age 47, of Brownstown, passed away unexpectedly on Thursday, February 1, 2018, at Schneck Medical Center, Seymour. Mr. Reynolds worked at Brownstown Electric for 28 years. He loved spending time with his family, grandchildren, nieces and nephew. He also loved fishing and hunting, especially hunting rabbits and deer with his brothers. Mr. Reynolds enjoyed cooking, attending sporting events, and tailgating at football games on Elm Street, Brownstown, and also with the Touchdown Club at Franklin College. Born on December 8, 1970, in Seymour, he was the son of Daymond and Maggie Overshiner Reynolds. His father preceded him in death and his mother survives in Brownstown. Survivors also include one son, Daymond (Lena) Reynolds, Jr. of Scottsburg; one daughter, Elizabeth (Bryan) Lonsberry of Scottsburg; two brothers: Brandon (Zita) Reynolds and Jason Reynolds, both of Brownstown; four grandchildren: Ryland Reynolds, Lakin Reynolds, Mason Lonsberry and Landon Lonsberry; and nieces and nephew: Shelby Reynolds, B. Reynolds and Anna May Reynolds. Funeral services for Andy Reynolds will be conducted at 11:00 a.m. on Monday, February 5, 2018, at Brownstown Christian Church with Danny Jackson officiating. Friends may call from 4:00 p.m. to 8:00 p.m. on Sunday, February 4, 2018, at Spurgeon Funeral Home, Inc., Brownstown, and from 10:00 a.m. until the time of the service on Monday at the Brownstown Christian Church. Interment will be at Fairview Cemetery, Brownstown. Memorials may be given to Brownstown Central Football POPS Club. Online memorials and condolences may be given at www.spurgeonfh.com

The family of Andy Reynolds created this Life Tributes page to make it easy to share your memories.

Send flowers to the Reynolds family.