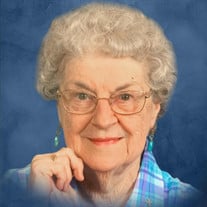 Betty Lou (Meahl) Melloncamp, age 93, of Brownstown, passed away peacefully on Saturday, May 22, 2021, at Hoosier Christian Village, Brownstown. Mrs. Melloncamp was a member of St. Peter’s Lutheran Church, Brownstown for 62 years where she was involved on various committees over the years. She was baptized on October 23, 1927 at Trinity Lutheran Church, and Confirmed in Christ on March 17, 1940 at Trinity Lutheran Church, Vallonia. Betty Lou graduated from Vallonia High School in 1945. Betty enjoyed growing flowers, as well as gardening and canning for her entire family. She loved attending her grandchildren’s activities and sporting events, watching IU sports, the Indianapolis Colts, and especially the Pacers when Reggie Miller played. Mrs. Melloncamp loved playing cards, and bowling with friends, attending the Jackson Co. Fair and was a member of the Jackson Co. Democratic club. Born on October 14, 1927, at her home in Vallonia, she was the daughter of Felix and Amanda (Tiemeier) Meahl, all of whom preceded her in death. On February 2, 1947, at Trinity Lutheran Church, Vallonia, she married Gerald Melloncamp and he preceded her in death on April 27, 1982 after 35 years of marriage. Survivors include three daughters: Wanda Lakins of Seymour, Denise Melloncamp of Brownstown, and Kathy (Craig) Fritz of Brownstown; one son, Jerry (Sandy) Melloncamp of Seymour; seven grandchildren: Brian (Sally) Lakins, Dee (Ervin) Kruse, Carissa Lakins, Clay (Jessica) Fritz, Kelly (Erik) Marshall, Keri (Rob) Anderson, and Kala (Matt) Housand; 22 great-grandchildren: 4 great great-grandchildren with 2 more on the way; one brother, Floyd Meahl; two sisters: Shirley Eggersman of Vallonia and Sarah Rotert of Seymour; and several nieces and nephews. She was also preceded in death by her in laws: Peggy Meahl, Lynn Eggersman, David Rotert and Carl & Alma Melloncamp, as well as, Pauline (Virgil) Klosterman, and Willard (Sharon) Melloncamp; niece: Connie (John) Goss; nephew: John Rotert. Funeral services for Betty Lou Melloncamp will be conducted at 12:00 p.m. on Wednesday, May 26, 2021, at St. Peter’s Lutheran Church, with Pastor Jeremy Yeadon officiating. Friends may call from 4:00 p.m. to 7:00 p.m. on Tuesday, May 25, 2021, at Spurgeon Funeral Home, Inc., Brownstown, and from 11:00 a.m. until the time of the service at 12:00 p.m. on Wednesday, May 25, 2021, at St. Peter’s Lutheran Church. Interment will be at St. Peter’s Lutheran Church Cemetery. Memorials may be given to St. Peter’s Lutheran Church Capital Campaign or Lutheran Central School. Online memorials and condolences may be given at www.spurgeonfh.com

The family of Betty Lou Melloncamp created this Life Tributes page to make it easy to share your memories.

Send flowers to the Melloncamp family.