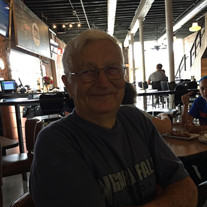 Bobby Ray Brown, age 85, of Seymour, passed away on Monday, December 18, 2017, at Schneck Medical Center, Seymour. Mr. Brown retired from Hoosier Parts and was the owner of Brown’s Marathon in Seymour. He enjoyed spending time with his children and grandchildren, riding his motorcycle, and working outdoors. Born on January 2, 1932, he was the son of Roy and Elizabeth Brown, both of whom preceded him in death. On November 2, 1962, at Vincennes, Indiana, he married Norma J. Wilcox and she survives in Seymour. Survivors also include seven sons: Rick (Cheri) Brown of Arizona; Greg (Ruth) Braxton-Brown of Florence, Kentucky; Chuck (Julia) Brown of California; Rob (Molly) Brown of California; Gary (Debbie) Trowbridge of Seymour; Brian (Amy) Brown of Seymour; and Bob (Tracey) Brown of Seymour; one brother: Noble Brown; two sisters: Ruth (Troy) Reynolds and Lu Wilson; 17 grandchildren; and 10 great grandchildren. Besides his parents, he was also preceded in death by one grandson, Holden Brown, and his brother, Roy Brown, Jr. A memorial service for Bobby Ray Brown will be held at 1:00 p.m. on Friday, December 29, 2017 at Spurgeon Funeral Home, Inc., Brownstown. Friends may call from noon until the time of the service on Friday, December 29, 2017 at the funeral home. Interment will be at Fairview Cemetery, Brownstown. Memorials may be given to Don & Dana Myers Cancer Center. Online memorials and condolences may be shared at www.spurgeonfh.com

The family of Bobby Ray Brown created this Life Tributes page to make it easy to share your memories.

Send flowers to the Brown family.