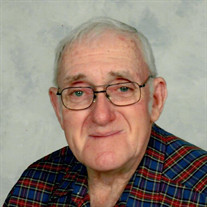 Carl R. Fish, age 90, of Norman, passed away peacefully on Thursday, July 18, 2019, surrounded by his two daughters and his wife, Helen. Mr. Fish had attended Kurtz Church of the Nazarene. He graduated from Clearspring High School in 1946 and served in the United States Army from 1950 to 1952. Carl was a farmer and a logger. He lived his entire life on his farm. He was a strong, simple and quiet man. Being passionate about his family, Carl was considered the “rock” of his family. He was very loyal to his family and loved providing for them. He also loved his farm and enjoyed woodworking and other projects. Born on August 6, 1928, on the homeplace in Norman, he was the son of Edgar and Bessie Callahan Fish, both of whom preceded him in death. In 1954, he married Charlotte Maggard and she preceded him in death in December, 1995. On June 27, 1997, he married Helen Cole and she survives in Seymour. Survivors also include two daughters: Lora Laney of Norman, and Carla (Troy) Orr of Bloomington, Illinois; one sister, Grace (Edward) Sakala of Baltimore, Maryland; four grandchildren: Toby Laney and Chad Laney, both of Norman; Alexandra Orr of Springfield, Missouri, and Trevor Orr, of Bloomington, Illinois; one great-grandson, Logan Laney; and one niece, Louise Bowling of Seymour and one nephew, Gary Cobb of Indianapolis, both of whom he helped raise. Carl was also preceded in death by five brothers: Herb Fish, Clarence Fish, Henry Fish, Ernest Fish, and Wayne Fish; three sisters: Ruth Fish, Rose Fish, and Dorothy Kirts; and son-in-law, Greg Stevens. Funeral services for Carl R. Fish will be conducted at 1:30 p.m. on Sunday, July 21, 2019, at Spurgeon Funeral Home, Inc., Brownstown, with Floyd Fisher officiating. Friends may call from 5:00 p.m. to 7:00 p.m. on Saturday, July 20, 2019, at Spurgeon Funeral Home, Inc., and from 12:30 p.m. until the time of the service on Sunday at the funeral home. Interment will be at Kurtz Cemetery. Memorials may be given to Kurtz Church of the Nazarene, Kurtz Cemetery, or Owen Salt Creek Township Fire Department. Online memorials and condolences may be given at [email protected]" title="Click to open in a new window or tab" target="_blank" rel="nofollow noopener">[email protected]

Carl R. Fish, age 90, of Norman, passed away peacefully on Thursday, July 18, 2019, surrounded by his two daughters and his wife, Helen. Mr. Fish had attended Kurtz Church of the Nazarene. He graduated from Clearspring High School in 1946 and... View Obituary & Service Information

The family of Carl R. Fish created this Life Tributes page to make it easy to share your memories.

Send flowers to the Fish family.