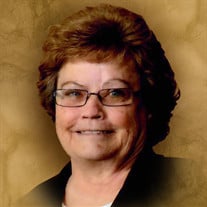 Connie Jo Perry Myers, age 72, of Brownstown, passed away unexpectedly on Wednesday, August 7, 2019, at her residence. Mrs. Myers was a life-time member of the Brownstown Presbyterian Church, where she taught Sunday School for many years. Connie loved her church and loved spending time with her family. She was a homemaker and a member of the Bowling Association. She enjoyed spending time with her bowling team members and bowling with them in the local bowling league. She also enjoyed playing games with her family and friends, and having lunches with her high school class of 1965. Born on June 2, 1947, in Seymour, she was the daughter of Cecil and Geneva M. Arnold Perry, both of whom preceded her in death. On July 1, 1967, at the Brownstown Presbyterian Church, she married Richard Myers and he survives in Brownstown. Survivors include one son, Perry (Jodi) Myers of Brownstown; one daughter, Angela VonFange of Brownstown; one brother, Buck (Mel) Perry of Brownstown; two sisters: Sue Taylor and Jane Perry, both of Brownstown; five grandchildren: Kyle VonFange, Bryce VonFange, Nigel Myers, Blaine (Heather) Stevens, and Dalton (Denise Maxie) Stevens; two great-grandchildren: Brantley Stevens and Owen Stevens; and several nieces and nephews. Connie was also guardian to her nephew, Jeff Perry. In addition to both parents, Connie was also preceded in death by two brothers: Gene Perry and Phil Perry. Funeral services for Connie Jo Perry Myers will be conducted at 11:00 a.m. on Monday, August 12, 2019, at Spurgeon Funeral Home, Inc., Brownstown, with Dave Ellis officiating. Friends may call from 1:00 p.m. to 5:00 p.m. on Sunday, August 11, 2019, at Spurgeon Funeral Home, Inc. and from 10:00 a.m. until the time of the service on Monday at the funeral home. Interment will be at Fairview Cemetery, Brownstown. Memorials may be given to Brownstown Presbyterian Church or Juvenile Diabetes Association. Online memorials and condolences may be given at www.spurgeonfh.com

Connie Jo Perry Myers, age 72, of Brownstown, passed away unexpectedly on Wednesday, August 7, 2019, at her residence. Mrs. Myers was a life-time member of the Brownstown Presbyterian Church, where she taught Sunday School for many years. Connie... View Obituary & Service Information

The family of Connie Jo Perry Myers created this Life Tributes page to make it easy to share your memories.