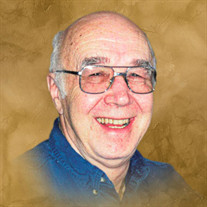 Dallas Duane Munter, age 87, of Brownstown, passed away on the morning of Friday, July 23, 2021, at his residence surrounded by his loving family. Mr. Munter was a member of the Brownstown United Methodist Church and also attended Brownstown Christian Church since 1989. Dallas was a member of the United States Air Force for four years and was assistant ranger for the Hoosier National Forestry. He was also a number cruncher and a “servant” to all. Dallas was a member of the Brownstown Exchange Club, for which he was treasurer for more than 30 years. He served in various service projects at both Brownstown Methodist and Brownstown Christian Church helping and supporting others. He served on numerous Emmaus Walks. Mr. Munter loved spending time with his family, including his dog, Buddy, and enjoyed traveling with his wife. He also enjoyed nature, being outside, woodworking, and always a good discussion. Born on October 15, 1933, in Brownstown, Illinois, a town smaller than Brownstown, Indiana, he was the son of Herman and Helen Oberlink Womack, both of whom preceded him in death. He married Gloria Russe and she preceded him in death. On November 18, 1989, at the Brownstown Christian Church, he married Jan Starr and she survives in Brownstown. Survivors also include one son, Bradley Munter of Brownstown; two step - children: Lori Starr (Brian Burns) of Noblesville and Matthew Starr of Brownstown; four grandchildren: Monica Munter, Charis Burns, Sarah Burns and Simon Eli Burns; two great-grandchildren: Ari Kamman and Allison Caverson; and sister-in-law, Maxine Munter. Mr. Munter was also preceded in death by a son, Randy Munter; daughter-in-law, Robin Munter; brother, Richard Munter; and sister, Beverly Diveley. Funeral services for Dallas Duane Munter will be conducted at 1:30 p.m. on Tuesday, July 27, 2021, at Brownstown Christian Church, 3rd floor. Friends may call from 11:30 a.m. until the time of the service at 1:30 p.m. on Tuesday, July 27, 2021, at Brownstown Christian Church, 3rd floor. Military honors will be presented by Veterans of Foreign Wars Post 1925, American Legion Post 89, Disabled American Veterans 47 and Vietnam Vets 7. Interment will be at Fairview Cemetery, Brownstown. Memorials may be given to the Columbus Area Emmaus or Brownstown Christian Church. All arrangements have been entrusted to the caring staff of Spurgeon Funeral Home, Inc. Online memorials and condolences may be given at www.spurgeonfh.com

Dallas Duane Munter, age 87, of Brownstown, passed away on the morning of Friday, July 23, 2021, at his residence surrounded by his loving family. Mr. Munter was a member of the Brownstown United Methodist Church and also attended Brownstown... View Obituary & Service Information

The family of Dallas Duane Munter created this Life Tributes page to make it easy to share your memories.

Dallas Duane Munter, age 87, of Brownstown, passed away on the...

Send flowers to the Munter family.