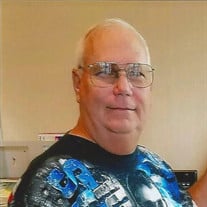 Danny Joe Wessel, age 60, of Brownstown, Indiana, passed away on Saturday, October 8, 2016 at IU Health University Hospital. Mr. Wessel was a member of the St. Peter’s Lutheran Church in Brownstown. Mr. Wessel loved IU, Nascar, and was an avid Tony Stewart fan. He was a member of the National Rifle Association, Jackson County Antique Machinery Association, Inc., Bass Masters, as well as a previous member of the Indiana Volunteer Firemen’s Association. Born on December 22, 1955, in Seymour, Indiana, he was the son of Norris Gene and Thelma (Disbro) Wessel, both of whom preceded him in death. On February 23, 1973, he married Jana Robison and she survives in Brownstown. Survivors also include two daughters, Jodi (Todd) Isaacs of Chandler, Arizona, and Brandy Leslie (Jason Renn) of Brownstown; one brother, Gary Gene (Rhonda) Wessel of Seymour; one sister, Linda (Tom) Hallow of Brownstown, three grandchildren, Hallie Wessel of Brownstown, and Kylie and Paige Isaacs of Chandler, Arizona. Besides his parents, he was also preceded in death by a son-in-law, Mark Leslie and brother-in-law Ernie Robison. Funeral services will be conducted at 11:00 a.m. on Wednesday, October 12, 2016 at Spurgeon Funeral Home, Inc., Brownstown. Friends may call from 4:00 p.m. to 8:00 p.m. on Tuesday, October 11, 2016 at Spurgeon Funeral Home, Inc., Brownstown, and from 10:00 a.m. until the time of the service on Wednesday, October 12, 2016 at the funeral home. Interment will take place at Fairview Cemetery, Brownstown. Memorials may be given to the Simon Cancer Center or IU Medical Health Center. Online memorials and condolences may be given at [email protected]" title="Click to open in a new window or tab" target="_blank" rel="nofollow noopener">[email protected]

The family of Danny Joe Wessel created this Life Tributes page to make it easy to share your memories.

Send flowers to the Wessel family.