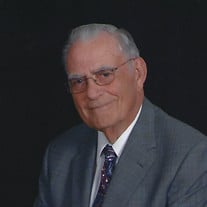 Darrel R. Duffy, age 85, of Norman, passed away on August 3, 2018, at Schneck Medical Center surrounded by his loving family. Mr. Duffy was a member of St. Peter’s Evangelical Lutheran Church, Brownstown. He held various offices at the church, including President of Lutheran Central School Board, Chairman of Elders, Chairman of Student Aid Board, serving as a member of the Church Council and serving on the music and worship committees. He was a member of the United States Navy from 1951 through 1955, serving two years of active duty in the European Waters during the Korean conflict. He was inducted into the “Royal Order of the Blue Noses” after crossing the Arctic Circle. Born on February 1, 1933, in Evansville, he was the son of Darrel Allen and Effie Bess Duffy, both of whom preceded him in death. He married Rosemary A. Eisterhold in 1952 and she preceded him in death in 1972. He then married Bonnie Umphress Hansome on October 31, 1973 and she survives in Norman. Mr. Duffy graduated from Bosse High School in 1950. He attended Evansville College one year and graduated from Indiana State University in 1956 with a BS in education. He then graduated from Indiana University with a Master’s Degree in education and also received a principal certificate and guidance certificate. His teaching career started in Brownstown in 1956. He taught Industrial Arts and Driver’s Education for 30 years and also served as Crisis Counselor for the school system for the last nine years of his career. Mr. Duffy retired from teaching in 1993 and after his retirement he became active in the Retired Teacher’s Association, serving as President for two years and also serving on their advisory board. During his teaching career, Mr. Duffy was active as a Cub Scout Master, Boy Scout Troop Leader, President of the Brownstown Jaycees, as well as a state and national director, President of the Brownstown Lions Club, President of the Brownstown Exchange Club, President of the Brownstown Classroom Teacher’s Association for seven years, Chairman of State Coordinating Teacher’s Council of District 8, scorekeeper for 25 years for Brownstown basketball and he received Honorary Chapter Farmer’s Award in FFA. In addition, he was a member of the Elks Club of Seymour and Moose organization in Madison, member of the NRA, life member of the VFW Post 1925 in Seymour and the American Legion Post 89 in Seymour. Mr. Duffy also served as Director of Dixon Chapel/Proctor Cemetery for numerous years. Survivors also include two sons: Nicholas John (Connie) Duffy and Bryan E. (Jean) Hansome; two daughters: Gail M. (Bruce) Browalski and Cherie Lynn Dowdell; 10 grandchildren: Jenny L. Villarreal, Niki Browalski, Jamie Tincher, Eric (Chrissy) Browalski, Shelly (Ron) Farace, Bridget (Adam) Disque, Karmen (Clayton) Blevins, Shelley Hansome, Megan (Miles) Compton and Ashley (Billy) Jachetta; and 15 great grandchildren: Britnie Farace, Joey Farace, Ben Deckard, Darci Deckard, Brindon Walls, Aiden Browalski, Jace Alan Browalski, Ava Claire Blevins, Jaden Disque, Landon Disque, Matthew Whittredge, Dwight Tincher, Ashton Villarreal, Melody Grace Compton, Olivia Marie Blevins, and Delilah Reese Jachetta. Funeral services will be conducted at 11:00 A.M. on Wednesday, August 8, 2018, at St. Peter’s Lutheran Church, Brownstown with Pastor Jeremy Yeadon and Pastor Jack Belk officiating. Friends may call from 4:00 P.M. to 8:00 P.M. on Tuesday, August 7, 2018, at Spurgeon Funeral Home, Inc., Brownstown, and from 10:00 A.M. until the time of the service on Wednesday at the church. Burial will be at Proctor Cemetery. Military honors will be presented by Veterans of Foreign Wars Post 1925, American Legion Post 89, Disabled American Veterans 47 and Vietnam Vets 7. Memorials may be given to St. Peter’s Lutheran Church, Brownstown, Driftwood Christian Church, and Proctor Cemetery. His last wish was for everyone to know that he was a husband, father, grandfather, great grandfather and a teacher, who loved people. Online memorials and condolences may be shared at www.spurgeonfh.com

The family of Darrel R. Duffy created this Life Tributes page to make it easy to share your memories.

Send flowers to the Duffy family.