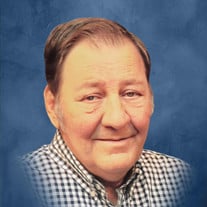 Donnie L. Sturgill, age 69, of Austin, passed away on Tuesday, February 22, 2022, at Norton Hospital in Louisville, Kentucky. Mr. Sturgill attended New Providence Church in Austin. Donnie worked at Lear Siegler, National Veneer Company, and Valeo, and he was a member of the Moose Lodge in Seymour. Donnie loved spending time with his family, especially his grandchildren. He also loved fishing, hunting, playing bingo, and scratching off lottery tickets. Born on July 22, 1952, in Hamilton, Ohio, he was the son of Tice and Gracie Hubbard Sturgill, both of whom preceded him in death. On January 20, 1979, in Seymour, he married Debora Scavitto and she preceded him in death on January 23, 2015. Survivors include three sons, Alexander J. Riley of Medora, Stevie (Cheryl) Sturgill of Hamilton, Ohio, and Mikey Sturgill of Hamilton, Ohio; five daughters: Charity (Jeremy) Stout of Brownstown, Holly (Joseph) Henline of Florida, Sarah Sturgill of Bloomington, Paula Proffitt of Hamilton, Ohio, and Deana Ridenour of Hamilton, Ohio; three sisters: Shirley Ratcliff of Hamilton, Ohio, Phyllis Genton of New Albany, and Marguita Ferris of Butlerville; 19 grandchildren; and 23 great-grandchildren. Mr. Sturgill was also preceded in death by one grandchild; one great-grandchild; six sisters; and three brothers. Funeral services for Donnie L. Sturgill will be conducted at 11:00 a.m. on Saturday, February 26, 2022, at Spurgeon Funeral Home, Inc., Brownstown, with Pastor Kelly Reed officiating. Friends may call from 4:00 p.m. to 8:00 p.m. on Friday, February 25, 2022, at Spurgeon Funeral Home, Inc., Brownstown, and from 10:00 a.m. until the time of the service at 11:00 a.m. on Saturday, February 26, 2022, at the funeral home. Interment will be at Wesley Chapel Cemetery, Scott County, Indiana. Memorials may be given to the American Diabetes Association. Funeral arrangements have been entrusted to the caring staff at Spurgeon Funeral Home, Inc. Online memorials and condolences may be given at www.spurgeonfh.com

The family of Donnie L. Sturgill created this Life Tributes page to make it easy to share your memories.

Send flowers to the Sturgill family.