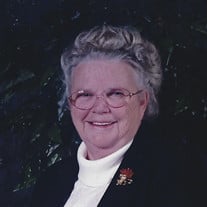 Dorothy L. McCory, age 89, of Brownstown, Indiana, passed away on, October 26, 2017 at Schneck Medical Center, Seymour, surrounded by her family. Mrs. McCory was a homemaker and a member of the Medora Pentecostal Church. She taught Sunday School for several years, and held various other positions. Dorothy was a prayer warrior and amazing mother and grandmother. Born on November 18, 1927 in Brownstown, she was the daughter of Curtis and Mamie Wells Reynolds, both of whom preceded her in death. On May 9, 1944, in Brownstown, she married Cyrus Cresson McCory and he preceded her in death in June, 1992. Survivors include two sons: Kenneth (Debbie) McCory of Bedford and Lee (Jill) McCory of Brownstown; one daughter: Patricia (John) Yeary of Freetown; one adopted daughter: Tomiko (Rick) Crites; two brothers: Jimmie Reynolds of Brownstown and George Reynolds of Salem; one sister: Betty McCuary; nine grandchildren: Chris McCory, Michael McCory, Daniel McCory, Jamie Knichel, Judy Doyle, Sheila Love, Tammy Endris, Jason McCory, and Jessica McCory; 25 great-grandchildren, and three great-great grandchildren. In addition to her parents, Mrs. McCory was also preceded in death by one sister: Hattie Reynolds Nicholson; two brothers, Robert and Harry Reynolds; one son, James McCory; and one granddaughter, Renee Blaker. Funeral services will be conducted at 10:00 a.m. on Wednesday, November 1, 2017 at Medora Pentecostal Church with Tim Gill and M.L. Walls officiating. Friends may call from 4:00 p.m. to 8:00 p.m. on Tuesday, October 31, 2017 at Medora Pentecostal Church, and from 9:00 a.m. until the time of the service on Wednesday at the church. Interment will be at Smallwood Cemetery. Memorials may be given to Medora Pentecostal Church Building Fund and Medora Pentecostal Church Foreign Missions. Services have been entrusted to Spurgeon Funeral Home, Inc. Online memorials and condolences may be given at [email protected]" title="Click to open in a new window or tab" target="_blank" rel="nofollow noopener">[email protected]

Dorothy L. McCory, age 89, of Brownstown, Indiana, passed away on, October 26, 2017 at Schneck Medical Center, Seymour, surrounded by her family. Mrs. McCory was a homemaker and a member of the Medora Pentecostal Church. She taught Sunday... View Obituary & Service Information

The family of Dorothy L. McCory created this Life Tributes page to make it easy to share your memories.

Send flowers to the McCory family.