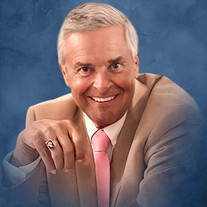 Ed Jackson passed away on Friday, July 16, 2021, with his family by his side. He was preceded in death by his father, Raymond Jackson; his mother, Francis Jackson; and sisters: Treva Fagan and Brenda Brown. He is survived by his wife, Kathy; his son, Aaron (Allison) Jackson, who are expecting their first child in September, and his son, Adam (Amy) Jackson and their children, Jhett and Emma Jackson. Ed was born on December 25, 1950, in Wabash County, Indiana. He attended Southwood High School through his sophomore year before transferring to Peru High School. While at Peru, he earned varsity letters in baseball, basketball, football and track. Ed graduated in 1969 and went on to run track at Ball State University in Muncie, Indiana. Ed graduated in 1973 with a Bachelor of Science in Elementary Education and a minor in Mathematics. As a life loyal sig, Ed Jackson was a member of the Sigma Chi fraternity. After graduating from Ball State in 1973, he taught middle school math and coached boys’ football and basketball at Maconaquah. He met and married Kathy in 1974 and moved to Seymour in 1982, where he became a financial advisor with Edward Jones Investments. Ed’s goal was to help his clients achieve financial independence by helping them meet their goals. Ed was involved in many community activities. He served on the board for Girls Inc., was a past president of the Seymour chapter of International Rotary, where he received the Paul Harris Fellowship Award, and he was a founding member of the Investment Committee of the Community Foundation. In November of 2018, Ed and Kathy became permanent residents of Venice, Florida, where they enjoyed boating and golfing. A Mass will be held at St. Ambrose Catholic Church in Seymour, Indiana, on Saturday, August 14, 2021, at 11:00 a.m. There will be a Celebration of Life reception from 1:00 p.m. to 3:00 p.m. at the Knights of Columbus in Seymour following the Mass. In lieu of flowers, the family asks that donations be made to St Jude’s Children Cancer Research Center. Funeral arrangements are being handled by the caring staff of Spurgeon Funeral Home, Inc., Brownstown. Online condolences can be given at www.spurgeonfh.com.

Ed Jackson passed away on Friday, July 16, 2021, with his family by his side. He was preceded in death by his father, Raymond Jackson; his mother, Francis Jackson; and sisters: Treva Fagan and Brenda Brown. He is survived by his wife, Kathy;... View Obituary & Service Information

The family of Ed Jackson created this Life Tributes page to make it easy to share your memories.

Send flowers to the Jackson family.