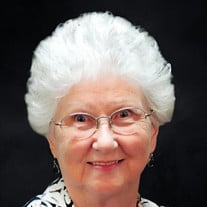 Edna L. Baker, age 84, of Brownstown passed away on Sunday, April 17, 2022, at Hoosier Christian Village, Brownstown, surrounded by her loving family. Edna graduated from Brownstown High School in 1955. She was a beautician for several years, and she also worked at Dura Automotive in Brownstown for many years, retiring in 2000. After her retirement, she was a caregiver for the elderly in the Brownstown area for eight years. Family was important to Edna. She loved spending time with her family, especially attending the sporting events of her grandchildren, and having Sunday dinners with her family. Mrs. Baker was a member of Tampico Christian Church for more than ten years. Born on December 26, 1937, she was the daughter of William J. and Mary Marie Loper McElfresh, both of whom preceded her in death. On January 11, 1959, she married Lester Baker at Ratcliff Grove and he preceded her in death on April 3, 2015. Survivors include two sons: Steve (Tammy) Baker of Vallonia, and Mark (Tammie) Baker of Brownstown; four grandchildren: James (Caitlyn) Baker, David Baker, Sarah Baker, and Scott (Whitney) Baker; five great-grandchildren: William Baker, Evan Baker, Leland Baker, Kason Hall, and Stella Baker; one sister, Mary (Lloyd Dean) Otte of Brownstown; and several nieces and nephews. Edna was also preceded in death by two sisters and brothers-in-law: Wilma (PT) Taylor and Dorothy (Raymond) Spurgeon; and one nephew, Kevin Otte. Funeral services for Edna L. Baker will be conducted at 11:00 a.m. on Saturday, April 23, 2022, at Spurgeon Funeral Home, Inc., Brownstown, with Randy King officiating. Friends may call from 9:00 a.m. until the time of the service at 11:00 a.m. on Saturday, April 23, 2022, at the funeral home. Interment will follow at Fairview Cemetery, Brownstown. Funeral arrangements have been entrusted to the caring staff at Spurgeon Funeral Home, Inc., Brownstown. Memorials may be given to Tampico Christian Church. Online memorials and condolences can be given at www.spurgeonfh.com

Edna L. Baker, age 84, of Brownstown passed away on Sunday, April 17, 2022, at Hoosier Christian Village, Brownstown, surrounded by her loving family. Edna graduated from Brownstown High School in 1955. She was a beautician for several years,... View Obituary & Service Information

The family of Edna L. Baker created this Life Tributes page to make it easy to share your memories.

Send flowers to the Baker family.