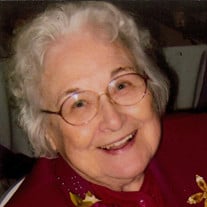 Life’s journey came full circle for Edna Evelyn Goss Dieringer, age 100, of Indianapolis. Evelyn was born on June 25, 1920, and passed away on Sunday, July 12, 2020. She attended Brownstown High School through her sophomore year in 1936. Then her family moved to Vernon, Indiana, and she graduated from Vernon High School in 1938. Evelyn worked in the North Vernon Rug Factory before applying for the Cadet Corps School of Nursing Program in support of the war effort. She attended St. Vincent School of Nursing and graduated in 1945. She then worked as a registered nurse until 1990. Throughout her life, Evelyn had a loving personality, caring for others close to her and professionally. She loved and enjoyed her family and will truly be missed by her family and friends. Evelyn is survived by two daughters: Joann Dieringer-McClellan and Margie Sue Dieringer Jarrett; grandchildren: Marshall Zainey, Mason Zainey, Sarah McClellan Quillian and McKeon Zainey Yoder; and great-graandchildren: Christina McClellan, Hayden Yoder, Addison Yoder, M.J. Zainey, Gracie Zainey, and Kinley Zainey. She was preceded in death by a son, Stephen Dieringer. Funeral services for Edna Evelyn Goss Dieringer will be conducted at 1:00 p.m. on Friday, July 17, 2020, at Flanner Buchanan-Oaklawn Memorial Gardens (Good Shepherd Chapel), Indianapolis. Friends may call from 11:00 a.m. until the time of the service at 1:00 p.m. at Flanner Buchanan-Oaklawn Memorial Gardens on Friday. Interment will be at Fairview Cemetery, Brownstown, at 1:00 p.m. on Saturday, July 18, 2020. Local funeral arrangements are being handled by Spurgeon Funeral Home, Inc., Brownstown. Online memorials and condolences may be given at www.spurgeonfh.com

The family of Edna Evelyn Goss Dieringer created this Life Tributes page to make it easy to share your memories.