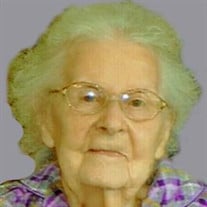 Erma Almira Lucas, 98, of Freetown, Indiana, passed away at 1:32 a.m. on Sunday, March 6, 2016 at Hoosier Christian Village, Brownstown. Mrs. Lucas was a member of the Ratcliff Grove Christian Church. Born on April 16, 1917, in Whiting, Kansas, she was the daughter of Glen Wilson and Amy Sarah Nichols Roath, both of whom preceded her in death. She married Bernard Lucas on August 12, 1945 in Topeka, Kansas, and he preceded her in death on August 9, 2005. Mrs. Lucas attended Maple Hill Grade School in Maple Hill, Kansas. She graduated from Peabody High School in 1935 in Kansas and was the last living member of her high school class. Erma then graduated from Stewart Beauty School in Topeka and also attended Clark Secretarial School in Topeka. Mrs. Lucas was office secretary for Santa Fe Railroad in Topeka, Kansas, until 1948 when she and her husband moved back to Brownstown. Erma and her husband then operated Lucas Farm & Home Supply in Brownstown from 1967 to 1983. Survivors include a twin daughter, Janice (Larry) Goss of Freetown; one grandson, Roger Spencer (Tonya Lewis) of Freetown; one great grandson, Lucas (Anna) Spencer of Freetown; and one great-great grandson, Rhett Meier Spencer of Freetown. In addition to her husband and parents, she was also preceded in death by one brother, Ellis Roath; three sisters, Lula Sharp, Bessie Waidlich, and Irene Boyers; a twin daughter, Joyce Spencer and son-in-law, Max Spencer. Funeral services for Erma Almira Lucas will be conducted on Wednesday, March 9, 2016 at 10:00 a.m. at Spurgeon Funeral Home, Inc., Brownstown, with David M. Lucas officiating. Friends may call from 4 p.m. until 8 p.m. on Tuesday, March 8, 2016 at Spurgeon Funeral Home, Inc. and from 9:00 a.m. until the time of service on Wednesday at the funeral home. Interment will take place at Fairview Cemetery, Brownstown. Memorials may be given to Ratcliff Grove Christian Church or Hoosier Christian Village Auxiliary. Arrangements are being handled by Spurgeon Funeral Home, Inc., Brownstown. Online condolences may be given at www.spurgeonfh.com

The family of Erma Almira Lucas created this Life Tributes page to make it easy to share your memories.

Send flowers to the Lucas family.