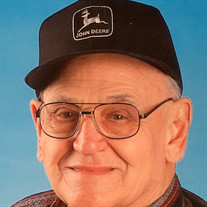 Everett H. Hackman, age 92, of Brownstown, passed away on Tuesday, November 19, 2019, at Meadow View Health & Rehab, Salem. Mr. Hackman was a life-long member of St. John’s Lutheran Church, Sauers. He served in the United States Army from 1946 to 1947. He worked at Dickson’s for more than 50 years, was Trustee of Grassy Fork Township for many years, was a farmer, and also delivered the Tribune for a number of years. Following his return home from the United States Army, Everett was involved in an automobile accident, which left him paralyzed and confined to a wheel chair for more than 70 years. Everett had a happy and cheerful disposition and never once complained about life. Everett belonged to the American Legion and VFW of Crothersville, and was a dedicated member of the Grassy Fork Volunteer Fire Department for numerous years. He loved fishing, enjoyed flying and spending time in Florida. Born on May 12, 1927, in Brownstown, he was the son of Walter and Emma Hageman Hackman, both of whom preceded him in death. Survivors include two brothers: Will (Linda) Hackman and Richard (Nina) Hackman, both of Brownstown; two sisters: Arlene Rieckers of Seymour, and Betty (Jerry) Lucas of Columbus; sisters-in-law: Jeanette Hackman of Brownstown, and Connie Hackman of Indianapolis; and several nieces and nephews. In addition to his parents, he was also preceded in death by two brothers: Gerald Hackman and Glen Hackman; and three sisters: Fern Hackman, Myrtle (Gerald) Sweany and Carol (Tom) McCrary; and a brother-in-law, John Rieckers, Sr. Funeral services for Everett H. Hackman will be conducted at 11:00 A.M. on Monday, November 25, 2019, at St. John’s Lutheran Church, Sauers, with Pastor Craig Muhlbach officiating. Friends may call from 1:00 P.M to 5:00 P.M. on Sunday, November 24, 2019, at Spurgeon Funeral Home, Inc., Brownstown, and from 10:00 A.M. until the time of the service on Monday at St. John’s Lutheran Church, Sauers. Interment will follow at St. John’s Lutheran Church, Sauers Cemetery. Military honors will be presented by Veterans of Foreign Wars Post 1925, American Legion Post 89, Disabled American Veterans 47 and Vietnam Vets 7. Memorials may be given to St. John’s Lutheran Church, Sauers, or St. John’s Lutheran Church, Sauers Building Fund. Online memorials and condolences may be given at www.spurgeonfh.com

The family of Everett H. Hackman created this Life Tributes page to make it easy to share your memories.

Everett H. Hackman, age 92, of Brownstown, passed away on Tuesday,...

Send flowers to the Hackman family.