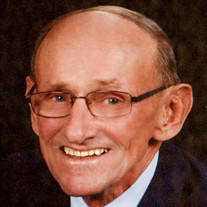 Gerald “Bingo” Hackman, age 79, of Brownstown, Indiana, passed away on Thursday, June 1, 2017 at his residence. Mr. Hackman was a member of St. John’s Lutheran Church, Sauers, where he served on numerous church committees. He was a 1955 graduate of Tampico High School. He was a school bus driver for 55 years and was recognized by Brownstown Central Community School Corporation for 52 years of service and dedication driving Bus No. 14. Mr. Hackman dearly loved his bus route and loved greeting the children with a smile each morning. He was also a dairy and grain farmer, worked as a security guard at Aisin Manufacturing in Crothersville and served in the Indiana National Guard. He was known as “Bingo” to his many friends and also known for his laughter and joking manner, as he never met a stranger. He also enjoyed telling funny stories with his friends. He loved his family and was especially proud of his grandchildren. Mr. Hackman was an avid dartball player with Sauers E Dartball Team. He would wear his favorite “good luck” shirt to all his dartball games. Born on October 18, 1937, he was the son of Walter and Emma Hageman Hackman, both of whom preceded him in death. On May 26, 1957, at St. John’s Lutheran Church, Sauers, he married Jeanette Stivers and she survives in Brownstown. Survivors also include one son, Kevin Andrew Hackman of Brownstown; one daughter, Kathy (Mark) Thompson of Columbus; three brothers: Everett Hackman, Willard (Linda) Hackman, and Richard (Nina) Hackman, all of Brownstown; two sisters: Arlene Rieckers of Seymour and Betty (Jerry) Lucas of Columbus; two grandchildren: Andy Hackman and Korey Thompson; three great grandchildren: Korben Thompson, Korbin King and Krew Willis Hackman; sister-in-law, Connie Hackman; and several nieces and nephews. In addition to both parents, he was also preceded in death by one brother, Glen Hackman; and three sisters: Fern Hackman, Myrtle Sweany and Carol McCrary. Funeral services will be conducted at 10:30 a.m. on Monday, June 5, 2017 at St. John’s Lutheran Church, Sauers, with Pastor Craig Muhlbach officiating. Friends may call from 1:00 p.m. until 5:00 p.m. on Sunday, June 4, 2017 at Spurgeon Funeral Home, Inc. and from 9:30 a.m. until the time of the service on Monday at the church. Interment will be at St. John’s Lutheran Church, Sauers Cemetery. Memorials may be given to St. John’s Lutheran Church, Sauers Building Expansion Fund, Schneck Medical Center Hospice, Don & Dana Myers Cancer Center and Brownstown Central School Transportation Department. Online memorials and condolences may be given at www.spurgeonfh.com

The family of Gerald "Bingo" Hackman created this Life Tributes page to make it easy to share your memories.

Send flowers to the Hackman family.