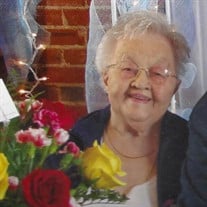 Hazel Foster Miranda, age 90, of Brownstown, Indiana, passed away on Thursday, September 24, 2015 at Hoosier Christian Village, Brownstown. She was a member of Brownstown First Baptist Church. Hazel graduated from Brownstown High School in 1944 and from the Louisville General Hospital School of Nursing and Catherine Spaulding College. She served on the Indiana and Kentucky Board of Nursing. She taught professional nursing at the Louisville General Hospital and practical Nursing for the Louisville Community Schools and Bartholomew County Schools. She also taught Health Occupations for Bartholomew County. She assisted in establishing the Practical Nurses School in New Albany. She retired from the Indiana Board of Health in 1990 after 32 years of service and owned Hazel’s Fashions in Brownstown. She was a member of the Brownstown Professional Women’s Association. Born on February 28, 1925, in Scott County, Indiana, she was the daughter of David and Alma Fleener Foster, both of whom preceded her in death. She married Elba S. Miranda and he preceded her in death. In addition to her husband and her parents, she was also preceded in death by one brother, Wilbur Foster, and two sisters, Mildred Blankenship and Delores Miller. Survivors include one son, Elba “Corky” (Teresa) Miranda of Brownstown; one step granddaughter, Sara LeMarr of Seymour; one brother, Kenneth (Sallie) Foster of Paris Crossing; one sister, Catherine Stout of Seymour; three step great grandchildren; and several nieces and nephews. Funeral services will be conducted at 10:30 a.m. on Monday, September 28, 2015 at Spurgeon Funeral Home, Inc., Brownstown, with Pastor Scott Irwin officiating. Interment will be at Fairview Cemetery, Brownstown. Friends may call from 1:00 p.m. to 4:00 p.m. on Sunday, September 27, 2015 at Spurgeon Funeral Home, Inc., Brownstown, and from 9:30 a.m. until the time of the service on Monday, September 28, 2015 at the funeral home. Memorials may be given to the American Cancer Society or Donor’s Choice. Online memorials and condolences may be given at [email protected]" title="Click to open in a new window or tab" target="_blank" rel="nofollow noopener">[email protected]

The family of Hazel F Miranda created this Life Tributes page to make it easy to share your memories.

Send flowers to the Miranda family.