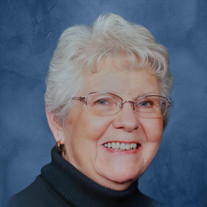 Helen Catherine Hamer Lahrman, age 90, of Brownstown, passed away on Thursday, December 30, 2021, at Schneck Medical Center, Seymour. Mrs. Lahrman was a member of Brownstown United Methodist Church for 70 years. Helen was a teacher at Brownstown Elementary School for 25 years. She was also a coach for the Brownstown Central High School girl’s golf team, a member of the Psi Iota Xi, and a member of the Hickory Hills Golf Club for more than 40 years. Helen loved spending time with her family and loved the Lahrman family farm. The Lahrman family received the Hoosier Homestead award in August, 2015, of which Helen was very proud. She was extremely passionate about her great-great-grandfather running the Hamer Mill, which is now known as Spring Mill. Helen was an exceptional seamstress. She loved working in her yard and in her flowers, and she was also an avid Purdue fan. Born on September 20, 1931, in Mitchell, she was the daughter of John N. and Lottie K. Child Hamer, both of whom preceded her in death. On June 23, 1951, in Brownstown, she married Robert F. Lahrman and he preceded her in death on November 30, 2016. Survivors include three sons: Robert B. (Alice) Lahrman of Indianapolis, Frank A. (Terrie) Lahrman of Seymour, and Marc A. (Angie) Lahrman of Brownstown; one brother, John N. (Cathy) Hamer; one sister, Georgia Lee Lucas; six grandchildren: Zachary Gamble, Katharine (Tim) Nicholson, Elizabeth Lahrman, Ericka (Jim) Nolan, Lute (Ally) Lahrman, and Jackson Lahrman; seven great-grandchildren: Deborah Gamble, Carter Gamble, Cameron Jones, Mia Gamble, George Nicholson, Christian Nolan, and Liam Nolan; and son-in-law, Carter Gamble. Helen was also preceded in death by a daughter, Deborah Lynn Gamble; a grandson, Carter Gamble, Jr.; two sisters: Jackie Childers and Doris Hamer; and a brother-in-law, James Lucas. Funeral services for Helen Catherine Hamer Lahrman will be conducted at 11:00 a.m. on Wednesday, January 5, 2022, at the Brownstown United Methodist Church with Pastor Paul Huntsman officiating. Friends may call from 4:00 p.m. to 7:00 p.m. on Tuesday, January 4, 2022, at Spurgeon Funeral Home, Inc., Brownstown, and from 10:00 a.m. until the time of the service at 11:00 a.m. on Wednesday, January 5, 2022, at the Brownstown United Methodist Church. Interment will be at Fairview Cemetery, Brownstown. Due to the Covid 19 Pandemic, the family requests that masks be worn when entering the funeral home for visitation and when attending the funeral service. Memorials may be given to Brownstown United Methodist Church or Friends of Spring Mill. Funeral arrangements have been entrusted to the caring staff of Spurgeon Funeral Home, Inc. Online memorials and condolences may be given at www.spurgeonfh.com

The family of Helen Catherine Hamer Lahrman created this Life Tributes page to make it easy to share your memories.

Send flowers to the Lahrman family.