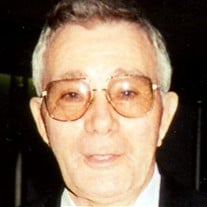 Jack Ronald Eaton, age 83, of North Fort Myers, Florida and formerly of Brownstown, Indiana passed away on Thursday, July 2, 2015 at Hope Hospice Center of North Fort Myers, Florida with his loving family by his side. Born on January 17, 1932, in Ramsey, Indiana, he was the son of Arvil and Lucille Eaton, both of whom preceded him in death. He married Emma Lou Allman on February 11, 1951 in Brownstown, Indiana, and she survives in Florida. They celebrated their 64th wedding anniversary this past February. Mr. Eaton attended Purdue University and returned home to help run the family business, The Vallonia Hatchery. Jack worked for Cummins before retiring and moving to Ft. Myers, Florida. He was a member of the Seymour Elk’s Club, Brownstown Knights of Pythias and was a member of the Brownstown United Methodist Church. In addition to his widow, he is also survived by daughter, Melanie Markel of Brownstown and son Doug (Betty) Eaton of Seymour. Others survivors include 6 granddaughters, Courtney (Jack) Bishop of Mobile, AL., Hilary (Frank) Conway of Hoboken, NJ., Ashley (David) Greenberg of New York, N.Y., Brittney (Matt) Schelich of Nashville, TN., Holly Eaton of Chicago, IL., and Kelly (Aaron) Schenk of Evansville, IN. Jack is also survived by 5 great grandchildren, Keller, Connor, and Parker Bishop who reside in Mobile, AL., Collin Conway of Hoboken, N.J., and Dylan Greenberg of New York, N.Y. A graveside service will be conducted at 4:30 P.M. on Saturday, August 1, 2015 at Fairview Cemetery for all friends and family. Arrangements are being handled by Spurgeon Funeral Home. Memorials may be given to Brownstown United Methodist Church through Spurgeon Funeral Home. Online memorials and condolences may be given through [email protected]" title="Click to open in a new window or tab" target="_blank" rel="nofollow noopener">[email protected]

The family of Jack Eaton created this Life Tributes page to make it easy to share your memories.

Send flowers to the Eaton family.