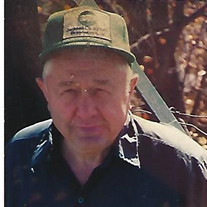 James Herschel Forgey, age 89, of Brownstown, passed away on Saturday, October 28, 2017 at Hoosier Christian Village, Brownstown. Mr. Forgey was a lifetime member of Surprise United Methodist Church. He was valedictorian of his 1946 Brownstown High School class. He served in the United States Army from 1950 to 1952, serving in the front line communications in Korea. Mr. Forgey became a lineman in Bowling Green, Kentucky, before becoming employed as a lineman and service tech with Jackson County REMC, where he was employed for 41 years. Mr. Forgey was a member of the VFW, Historical Society, Masonic Lodge, Knights of Pythias, Genealogical Society and Scottish Rites, and was involved in the community affairs of the Jackson County Fair and Fort Vallonia Days. In addition, Mr. Forgey helped place United States flags on veterans’ graves in western Jackson County cemeteries for many years. Born on August 13, 1928, in Brownstown, he was the son of James and Edith McNiece Forgey, both of whom preceded him in death. On September 14, 1958, in Brownstown, he married Berniece Barnett and she preceded him in death in September, 1985. Survivors include three nieces: Jayne Forgey Croghan of Indianapolis; Barbara Cotz of Okemos, Michigan; and Susan Schneider of Mainville, Ohio; and two nephews: James Forgey of Hamden, Connecticut; and Steven Forgey of Lansing, Michigan. He was also preceded in death by two brothers: Harry Forgey and Floyd Forgey. Funeral services for James Herschel Forgey will be conducted at 1:00 p.m. on Friday, November 3, 2017 at Spurgeon Funeral Home, Inc., Brownstown, with Rev. David Ison officiating. Friends may call from 10:00 a.m. until the time of the service on Friday at Spurgeon Funeral Home, Inc. A masonic service and Knights of Pythias service will be held at 12:30 p.m. on Friday, November 3, 2017 at Spurgeon Funeral Home, Inc. by Washington Lodge No. 13 F & AM. Interment will be at Fairview Cemetery, Brownstown. Military honors will be presented by Veterans of Foreign Wars Post 1925, American Legion Post 89, Disabled American Veterans 47 and Vietnam Vets 7. Memorials may be given to Surprise United Methodist Church or Hoosier Christian Village Auxiliary, Brownstown. Online memorials and condolences may be given at www.spurgeonfh.com

James Herschel Forgey, age 89, of Brownstown, passed away on Saturday, October 28, 2017 at Hoosier Christian Village, Brownstown. Mr. Forgey was a lifetime member of Surprise United Methodist Church. He was valedictorian of his 1946... View Obituary & Service Information

The family of James Herschel Forgey created this Life Tributes page to make it easy to share your memories.

James Herschel Forgey, age 89, of Brownstown, passed away on...

Send flowers to the Forgey family.