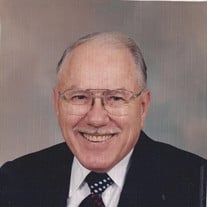 James H. Rice, age 92, of Seymour, Indiana, formerly of Brownstown, passed away on Monday, August 1, 2016 at Covered Bridge Health Campus, Seymour. Mr. Rice was a member of the United States Navy during World War II and was a civil engineer for the State of Indiana from 1949 until his retirement in 1992. He was also a member of the Brownstown Presbyterian Church, where he served as Elder and Sunday School superintendent for many years. Mr. Rice graduated from Notre Dame University and was presented Sagamore of the Wabash and Kentucky Colonel. He currently is a member of the American Legion, Scottish Rite and Washington Lodge #113 F&AM, where he served as Secretary/Treasurer for numerous years. Born on June 1, 1924, he was the son of Leslie and Addeline Hopper Rice, both of whom preceded him in death. He was also preceded in death by his step father, Ray “Shorty” Drager. He married Marilyn Hanners and she preceded him in death in 1961. On April 25, 1965, he married Leora May Hanners and she preceded him in death on June 28, 2013. Survivors include two sons, James S. (Dona) Rice of Carmel, Indiana, and Brian D. (Kellie) Rice of Indialantic, Florida; one daughter, Paula J. (Ronnie) Roberts of Brownstown; one sister, Linda (Jon) Louden of Indianapolis; six grandchildren, Jami (Derick) Stuckwisch, Kirby (Justin) Stacks, Aimee (Aaron) Killey, Erin Solis, Spencer Roberts and Ethan Rice; six great grandchildren, Jack Stuckwisch, Hank Stuckwisch, Grant Killey, Brielle Killey, Owen Killey and Grady Stacks; two step grandchildren, Jon (Casey) Wright and Jenny (David) Brown; and one step great grandson, Zach Brown. Funeral services will be conducted at 1:00 p.m. on Thursday, August 4, 2016 at Spurgeon Funeral Home, Inc., Brownstown, with Pastor Steve Gommel officiating. Friends may call from 11:00 a.m. until the time of the service on Thursday at the funeral home. Interment will take place at Fairview Cemetery, Brownstown, with full military honors to be presented by Veterans of Foreign Wars Post 1925, American Legion Post 89, Disabled American Veterans 47 and Vietnam Vets 7. Memorials may be given to Donor’s Choice. Online memorials and condolences may be given at [email protected]" title="Click to open in a new window or tab" target="_blank" rel="nofollow noopener">[email protected]

James H. Rice, age 92, of Seymour, Indiana, formerly of Brownstown, passed away on Monday, August 1, 2016 at Covered Bridge Health Campus, Seymour. Mr. Rice was a member of the United States Navy during World War II and was a civil... View Obituary & Service Information

The family of James H. Rice created this Life Tributes page to make it easy to share your memories.

Send flowers to the Rice family.