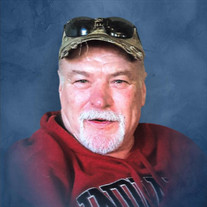 Jeffrey Lynn “Citrus” Robison, age 60, of Brownstown, passed away on Monday, January 4, 2021, at Norton Hospital, Louisville, Kentucky. Jeff was of the Christian faith. He was a life-time truck driver and a former member of the Saddle Club. He loved spending time with his grandchildren, growing his garden every year, riding horses, playing baseball and watching sports. Jeff was also an avid I.U. fan. Born on August 18, 1960, in Seymour, he was the son of Louis Lynch and Mary Virginia Lubker, and was the grandson of George and Myrtle Robison. His father and his grandparents preceded him in death and his mother survives in Brownstown. Survivors also include significant other of 13 years, Kathy Hickman; five brothers: Mark (Deneen) Lubker of Reddington, Marty (Lori) Lubker of LaGrange, Kentucky, Brian Lubker of Seymour, Mark Lynch of Brownstown, and Steve (Katrina) Lynch of Brownstown; one sister, Dolly (Harold) Davidson of Brownstown; an aunt, Carolyn Robison of Brownstown; three nieces: Maci Lubker, Kylie Lubker and Kelsey Lubker; and two nephews: Landon Lubker and Treyton Lubker. Mr. Robison was also preceded in death by a sister-in-law, Darlene Lynch. Graveside services for Jeffrey Lynn Robison will be conducted at 12:00 noon on Thursday, January 7, 2021, at Fairview Cemetery, Brownstown, with Mitchell McIntyre officiating. Due to the Covid 19 Pandemic, Spurgeon Funeral Home, Inc. will be practicing social distancing according to CDC guidelines. Interment will be at Fairview Cemetery, Brownstown. Memorials may be given to Immanuel Lutheran Church or Red Sky Rescue. Online memorials and condolences may be given at www.spurgeonfh.com

Jeffrey Lynn &#8220;Citrus&#8221; Robison, age 60, of Brownstown, passed away on Monday, January 4, 2021, at Norton Hospital, Louisville, Kentucky. Jeff was of the Christian faith. He was a life-time truck driver and a former member of the Saddle... View Obituary & Service Information

The family of Jeffrey Lynn "Citrus" Robison created this Life Tributes page to make it easy to share your memories.

Send flowers to the Robison family.