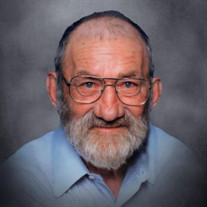 Joe “Mountain Man” Ramp, age 92, of Freetown, passed away on Friday, August 6, 2021, at his home. Joe was known as “The Man”, “The Myth”, “The Legend”. For no bigger than he was, he was a “Mountain of a Man”. Born on August 26, 1928, in Jackson County, he was the son of Frank D. and Adda McMahan Ramp, both of whom preceded him in death. On October 22, 1955, he married Goergia Estes and she preceded him in death on November 4, 2008. Survivors include three daughters: Judy Ann (David) Blish, Penny Jo Ramp, and Fayetta Kay Ramp; grandchildren: Mark Alcorn, Matthew (Miranda) Alcorn, Michael (Leigh) Alcorn, Kevin (Ashley) Alcorn, Sarah Jackson, Destiny Jo Johnson, and Cory Ramp; great-grandchildren: Austin, Cameron, Lylah, Marilyn, Deven, Kyler, Maddison, Cooper, Azalia, and Kashten; and former son-in-law, Jack Alcorn. Besides his parents, Joe was also preceded in death by two sisters: Katherine Altemeyer and Myrtle White; and five brothers: Myrle Ramp, Jacob Ramp, Albert Ramp, Keith Ramp, and infant brother, Omer Ramp. Joe graduated from Cortland High School in May, 1947. He served in the United States Navy from August 25, 1947, to August 23, 1951, during the Korean War, and he retired from Kieffer Paper Mill in 1993. He was an avid outdoorsman. It’s always interesting to hear the generations after him tell and compare stories. He will be greatly missed and remembered. Funeral services for Joe “Mountain Man” Ramp will be conducted at 11:00 a.m. on Saturday, August 14, 2021, at Spurgeon Funeral Home, Inc., Brownstown, with Rev. Barry DeWitt officiating. Friends may call from 5:00 p.m. to 7:00 p.m. on Friday, August 13, 2021, at Spurgeon Funeral Home, Inc., Brownstown, and from 10:00 a.m. until the time of the service at 11:00 a.m. on Saturday at the funeral home. Military honors will be presented by Veterans of Foreign Wars Post 1925, American Legion Post 89, Disabled American Veterans 47 and Vietnam Vets 7. Interment will be at Smallwood Cemetery, Brownstown. Memorials may be given to Schneck Medical Center Hospice or International Rett Syndrome Association. All arrangements have been entrusted to the caring staff of Spurgeon Funeral Home, Inc., Brownstown. Online memorials and condolences may be given at www.spurgeonfh.com

The family of Joe "Mountain Man" Ramp created this Life Tributes page to make it easy to share your memories.

Send flowers to the Ramp family.