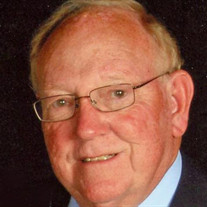 John Henry “Butch” Robertson, 78, of Brownstown, Indiana, passed away Wednesday, June 7, 2017, at his residence. Butch worked at the Robertson Corporation for over 50 years and was president until his retirement. He was a veteran of the US Army, and served in Vietnam. Mr. Robertson was a member of the Peoples Bank Board of Directors since 1997. He was a member of the Brownstown Presbyterian Church. He served on the Jackson Co. Fair Board since 1968 and was chairman of a variety of committees. He served as Vice - President for a record 6 years and served as Fair Board President from 1996 - 1998. In 1999, he became chairman of the carnival committee. This was by far his favorite position, and he would be there everyday and stayed until the last penny was counted and last ride closed. He also was a member of several community organizations. He was secretary for the Brownstown Area Sesquicentennial steering committee in 1966. He had been a member of Brownstown Jaycees and Seymour Elks Lodge. He was a certified pyro- technician and organized the Lake & Forest Club fireworks display every July 4th. Butch spent countless hours at his favorite “landings,” He loved hanging with his friends at Sparky’s in the Florida Keys, At home, you could find him with “his boys” at Abe’s Landing. He loved cheering on his grandkids at all their games. He never missed an opportunity to teach them one of his “limmericks” or give them a high five. He enjoyed tinkering in his workshop. He would rearrange until every piece of hardware was labeled and organized. He loved all boats, especially his Ski Supreme, which made the best power turns. He took pride in restoring his vintage wood Correct Craft boat. Born on November 8, 1938, in Brownstown, IN, he was the son of Richard S. and DeAlba Brodhecker Robertson. On May 9, 2009, in Indianapolis, he married Ruth Beickman Robertson. Besides his wife, he is survived by 2 daughters Jami (Derick) Stuckwisch of Brownstown, and Kirby (Justin) Stacks of Brownstown. His grandchildren are Jack Stuckwisch, Hank Stuckwisch and Grady Stacks, all of Brownstown, his sister, Mary Sue Spurgeon; and several nieces and nephews and their families also survive. Family members preceding Butch in death were his parents, as well as brother, Phil Robertson, and a brother-in-law, Larry Spurgeon. Funeral services for Butch will be conducted at 11:00 a.m. on Saturday, June 10, 2017, at the Brownstown Presbyterian Church. Rev. John VanderZee and Pastor Jack Belk will officiate. Interment will follow at Fairview Cemetery, Brownstown. Military honors will be presented by Veterans of Foreign Wars Post 1925 Visitation for friends will be from 4:00 p.m. to 8:00 p.m. on Friday, June 9, 2017, at Spurgeon Funeral Home, Inc. in Brownstown and from 10:00 a.m. until the time of the service on Saturday, June 10, 2017, at the Brownstown Presbyterian Church. Memorials may be given to the Brownstown Presbyterian Church, Good Shepherd Lutheran Church, Schneck Hospice, and St. Peter’s Lutheran Church. Online memorials and condolences may be shared at www.spurgeonfh.com

John Henry &#8220;Butch&#8221; Robertson, 78, of Brownstown, Indiana, passed away Wednesday, June 7, 2017, at his residence. Butch worked at the Robertson Corporation for over 50 years and was president until his retirement. He was a veteran... View Obituary & Service Information

The family of John H. "Butch" Robertson created this Life Tributes page to make it easy to share your memories.

Send flowers to the Robertson family.