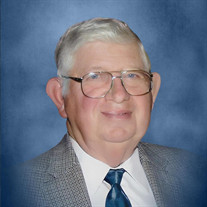 John H. Stuckwisch, age 80, of Brownstown, entered eternal life with his Lord and Savior on Sunday, January 9, 2022, at Schneck Medical Center, Seymour. John was a life-time member of St. Peter’s Lutheran Church, Brownstown. John served as Chairman of St. Peter’s Lutheran Church for 20 years, and he also served as Treasurer, Financial Secretary, and Chairman of St. Peter’s Foundation. Mr. Stuckwisch was a 1959 graduate of Brownstown High School and a 1963 graduate of Indiana Central. John then became a math teacher at Brownstown Central High School and held that position for 36 years. John loved teaching, and he also served as a substitute teacher after his retirement. He helped students understand what they were doing and why they were doing it instead of using a formula. John’s teaching motto was “the students do not have to like you, but they do have to respect you”. John was named the most influential teacher by two of Indiana’s Academic All-Star students. He was also a member of the Jackson County Retired Teachers Association and served as President for 3 years. John had a passion for hunting beagles since his childhood, and he loved the American Kennel Club Beagle Field Trials. He was appointed by the American Kennel Club to the committee to write the rules for SPO field trials, and he was later appointed to the committee to write rules for the Two Couple Pack option. He is the only person at this time to be voted into both the SPO and the Two Couple Pack Hall of Fame. John was a member of the Southeastern Indiana Beagle Club, the Silver Creek Beagle Club, and the Clay County Beagle Club. Born on September 14, 1941, in Brownstown, he was the son of Frederick J. and Thelma (Vahl) Stuckwisch, both of whom preceded him in death. On May 26, 1980, at the Brownstown United Methodist Church, he married Joyce Moenich and she survives in Brownstown. Survivors also include one son, Brian (Stephanie) Moenich of Flat Rock; one brother, Fred (Shirley) Stuckwisch of Brownstown; two grandchildren: Joshua Moenich and Caitlin Moenich; two nephews: R. Edward (Sara) Stuckwisch of Brownstown, and Russell Stuckwisch of Brownstown; and great-nieces and great-nephews: Amanda (Emmitt) Hanner, Matthew D. Stuckwisch, and Abigail Stuckwisch. John was also preceded in death by one brother, Richard D. Stuckwisch. Funeral services for John H. Stuckwisch will be conducted at 11:00 a.m. on Friday, January 14, 2022, at St. Peter’s Lutheran Church, Brownstown, with Pastor Jeremy Yeadon officiating. Friends may call from 4:00 p.m. to 8:00 p.m. on Thursday, January 13, 2022, at Spurgeon Funeral Home, Inc., Brownstown, and from 10:00 a.m. until the time of the service at 11:00 a.m. on Friday, January 14, 2022, at St. Peter’s Lutheran Church, Brownstown. Due to the Covid 19 Pandemic, masks will be required when entering the funeral home for visitation, and also when entering the church for the funeral service. Interment will be at St. Peter’s Lutheran Cemetery, Brownstown. Memorials may be given to St. Peter’s Lutheran Church Building Fund, Lutheran Central, or Stuckwisch Education Scholarship Fund. All funeral arrangements have been entrusted to the caring staff at Spurgeon Funeral Home, Inc. Online memorials and condolences may be given at www.spurgeonfh.com

The family of John H. Stuckwisch created this Life Tributes page to make it easy to share your memories.