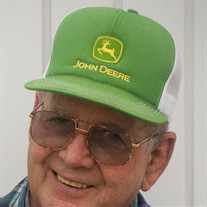 Joseph “Joe” Paul Bond, age 78, of Kurtz, passed away on Saturday, November 17, 2018, at his residence with his family by his side. Joe was a member of the Kurtz Church of the Nazarene, where he served as a Trustee Board member of the church. He was a farmer and retired after 35 years of employment at Cummins Engine Co. He enjoyed camping with his family and friends, horseback riding at his family’s campground, and also having annual hog roasts at the campground. Joe loved his boys and loved tinkering on John Deere tractors with them, and also enjoyed wagon rides at Houston and tractor drives at Kurtz. Born on March 7, 1940, in Elkinsville, he was the son of Walter and Mary Deckard Bond, both of whom preceded him in death. On September 23, 1961, at Kurtz Church of the Nazarene, he married Marilyn Goforth and she survives in Kurtz. Survivors also include two sons: Jeff (Doris) Bond of Brownstown, and Roger (Sharon) Bond of Kurtz; two brothers: David (Lucy) Bond, and James (Linda) Bond, both of Brown County; one sister, Faith (Jerry) Floyd of Brown County; four grandchildren: Diana (Sam) Nolan of Brownstown, Pam (Brad) Nicholson of Salem, Amanda (Ty) Robertson of Seymour, and Rev. Kevin (Stephanie) Bond of Colorado; and ten great-grandchildren: Naomi Nolan, Eli Nolan, Moses Nolan, Gwendolyn Nicholson, Elaina Nicholson, Martin Nicholson, Wyatt Robertson, Jasper Robertson, Lydia Bond, and Steven Joseph Bond (coming in February). Besides his parents, he was also preceded in death by one brother, William Bond; and two sisters: Florence Barnes and Phyllis Ann Bond. Funeral services for Joseph “Joe” Paul Bond will be conducted at 11:00 a.m. on Wednesday, November 21, 2018, at Kurtz Church of the Nazarene with Floyd Fisher officiating. Friends may call from 4:00 p.m. to 8:00 p.m. on Tuesday, November 20, 2018, at Spurgeon Funeral Home, Inc., Brownstown, and from 10:00 a.m. until the time of the service on Wednesday at Kurtz Church of the Nazarene. Interment will be at Kurtz Cemetery. Memorials may be given to Kurtz Church of the Nazarene or Don and Dana Myers Cancer Center of Seymour. Online memorials and condolences may be given at [email protected]" title="Click to open in a new window or tab" target="_blank" rel="nofollow noopener">[email protected]

Joseph &#8220;Joe&#8221; Paul Bond, age 78, of Kurtz, passed away on Saturday, November 17, 2018, at his residence with his family by his side. Joe was a member of the Kurtz Church of the Nazarene, where he served as a Trustee Board member... View Obituary & Service Information

The family of Joseph "Joe" Paul Bond created this Life Tributes page to make it easy to share your memories.

Send flowers to the Bond family.