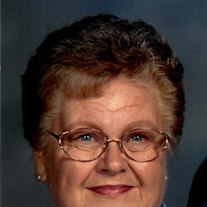 Juanita Eileen (Hackman) Wessel, age 81, of Vallonia, passed away on Monday, March 11, 2019, at Schneck Medical Center, Seymour. She went home to be with her Heavenly Father after a brief fight with cancer. Mrs. Wessel was a member of Trinity Lutheran Church, Vallonia, where she sang in the church choir for sixty years. Juanita was a homemaker and also belonged to the Euchre Club for fifty years. Juanita and her husband, Debron, enjoyed Polka and square dancing. She also enjoyed quilting and sewing, and she especially enjoyed spending time with her grandchildren and going to their choir and orchestra concerts and sporting events. Juanita had a love for working in her vegetable and flower gardens and was known for her homemade breads and pies. Born on April 17, 1937, in Jackson County, Indiana, she was the daughter of Arthur and Emma Borcherding Hackman, both of whom preceded her in death. On August 21, 1960, at Trinity Lutheran Church, Vallonia, she married Debron Wessel and he preceded her in death on April 8, 2014. Survivors include one son, Loren (Lorna) Wessel of Brownstown; one daughter, Linda (Jonathan) Pardieck of Indianapolis; one sister, Wilma (Leroy) Miller of Brownstown; four grandchildren: Jessica (Nathaniel) Gettelfinger of Salem, Heather Wessel of Brownstown, Kelsey Pardieck of Indianapolis, and Brandon Pardieck of Indianapolis. Juanita Eileen was excited knowing she was expecting her first great-grandchild this spring. Juanita was also preceded in death by an infant son, Stuart Wessel; an infant brother, Lowell Hackman; brother, Marvin Hackman; and sister-in-law, Norma Hackman. Funeral services for Juanita Eileen Wessel will be conducted at 11:00 a.m. on Thursday, March 14, 2019, at Trinity Lutheran Church, Vallonia, with Pastor Jordan McKinley officiating. Friends may call from 4:00 p.m. to 8:00 p.m. on Wednesday, March 13, 2019, at Spurgeon Funeral Home, Inc., Brownstown, and from 10:00 a.m. until the time of the service on Thursday at Trinity Lutheran Church, Vallonia. Interment will be at Trinity Lutheran Church Cemetery, Vallonia. Memorials may be given to Trinity Lutheran Church, Vallonia. Online memorials and condolences may be given at www.spurgeonfh.com

Juanita Eileen (Hackman) Wessel, age 81, of Vallonia, passed away on Monday, March 11, 2019, at Schneck Medical Center, Seymour. She went home to be with her Heavenly Father after a brief fight with cancer. Mrs. Wessel was a member of Trinity... View Obituary & Service Information

The family of Juanita Eileen (Hackman) Wessel created this Life Tributes page to make it easy to share your memories.