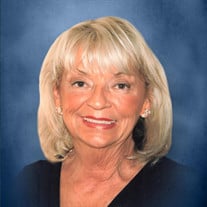 Karen Elaine Sterling, age 74, of Seymour, passed away on Friday, February 18, 2022, at her residence surrounded by her loving and devoted family. Born on June 27, 1947, in Seymour, Elaine was the daughter of Alan W. and Sara Louise Robertson Murray, both of whom preceded her in death. On May 30, 2009, she married Nelson “Nick” Sterling and he preceded her in death on July 6, 2019. Elaine loved her family, friends, art, and animals more than anything. Anyone who knew Elaine was touched by her kindness, compassion, humor, and creativity. Always up for a good time, she was fun-loving and witty with a great sense of humor, and sometimes even mischievous in an endearing way. Elaine was a person of many talents. She was an artist and loved volunteering at Southern Indiana Center for the Arts. She was also a nurse and a realtor, which included decorating and staging homes. In addition, Elaine was a hair stylist and manager of a beauty school. She was an avid reader of many different genres. Some of her favorites included Still Meadow by Gladys Taber, the Foxfire series, and various poems by Robert Frost and Emily Dickinson. Survivors include one son, Nelson Sterling, Jr. of Columbus; two sisters: Judy Peters of Brownstown, and Anita (Dick) Burton of Brownstown; two grandchildren: Christa Sterling of Columbus, and Erica (Evan) Daily of Columbus; one great-granddaughter, Ayla Daily of Columbus; one brother-in-law, Lloyd (Jeanette) Sterling of Brownstown; two sisters-in-law: Catherine Sterling and Thelma Kiser of Brownstown; nieces: Marcia Doran of Bloomington, and children: Maggie Doran of Denver, Colorado, and Patrick (Lauren) Doran and children, Jackson and Gabriella, of Fishers, Erin (John) Barrett and children, Zion, Allie, Isaiah, and Henry, of Martinsville, Chris (John) Sommers of Brownstown, Robin (Toby) Pauley of Brownstown, Kathy (Jim) Passerini of Brownstown, Carol (Tim) Hayden of Brownstown, and Wanda Bobb of Brownstown, Holly (Rusty) Gray of Brownstown, and Courtney (Zach) Branaman of Brownstown; nephews, Ryan (Amber) Burton and children, Arabelle, Charlotte, Lincoln, and Lola of Madison, Wisconsin, Keith “Bo” (Dana) Sterling of Brownstown, and Jeff Kiser of Brownstown. Elaine was also preceded in death by sister-in-law, Nan Zollman; and two brothers-in-law: George Sterling and Robert Sterling. Funeral services for Karen Elaine Sterling will be conducted at 11:00 a.m. on Wednesday, February 23, 2022, at Spurgeon Funeral Home, Inc., Brownstown. Friends may call from 5:00 p.m. to 8:00 p.m. on Tuesday, February 22, 2022, at Spurgeon Funeral Home, Inc., and from 10:00 a.m. until the time of the service at 11:00 a.m. on Wednesday, February 23, at the funeral home. Interment will follow at Fairview Cemetery, Brownstown. Memorials may be given to Southern Indiana Center for the Arts or Red Sky Rescue. Funeral arrangements have been entrusted to the caring staff at Spurgeon Funeral Home, Inc., Brownstown. Online memorials and condolences may be given at www.spurgeonfh.com

Karen Elaine Sterling, age 74, of Seymour, passed away on Friday, February 18, 2022, at her residence surrounded by her loving and devoted family. Born on June 27, 1947, in Seymour, Elaine was the daughter of Alan W. and Sara Louise Robertson... View Obituary & Service Information

Karen Elaine Sterling, age 74, of Seymour, passed away on Friday,...

Send flowers to the Sterling family.