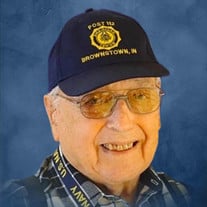 Kenneth Ralph Holloway, age 96, of Brownstown, passed away on Friday, October 16, 2020, at Silver Oaks Health Campus in Columbus. Kenneth was a life-time member of Brownstown United Methodist Church. Mr. Holloway served on the USS Minneapolis in the United States Navy from 1943 to 1945 during World War II. He also worked as a lineman and electrician with Duke Energy for more than 30 years. He was a member of the Masonic Lodge, Eastern Star and Lions Club. Kenneth loved staying active during his life, traveling and working and doing projects with his hands. Born on August 20, 1924, in Hamilton County, he was the son of Floyd V. and Iva M. Snyder Holloway, both of whom preceded him in death. In 1943, he married Mary Eileen Rogers and she preceded him in death on August 28, 1957. In January 1962, he married Marian G. Cheek and she survives. Survivors include three sons: Dr. Michael (Reva) Holloway of Greentown, Patrick Holloway of Brownstown and Kenny (Lori) Holloway of Columbus; one daughter, Barbara Marion of Michigan; grandchildren: Chantel, Russ, Brad, Beth, Dawn, Kevin, Jennifer, Amy, Lisa, Michael, Jackie, Chris, Joshua and Lauren; and several great-grandchildren. Mr. Holloway was also preceded in death by one daughter, Bonnie Bolton; son-in-law, Russell Marion; step-daughter, Patricia Chase; two sisters: Virginia and Marguerite; and two brothers: William and Larry. A private family funeral service for Kenneth Ralph Holloway will be held. Memorials may be given to Silver Oaks Legacy Lane through Spurgeon Funeral Home, Inc., Brownstown. Arrangements are being handled by Spurgeon Funeral Home, Inc. Online memorials and condolences may be given at www.spurgeonfh.com

The family of Kenneth Holloway created this Life Tributes page to make it easy to share your memories.

Kenneth Ralph Holloway, age 96, of Brownstown, passed away on...

Send flowers to the Holloway family.