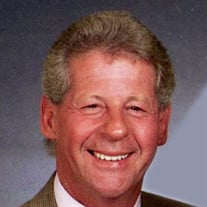 Larry R. Spurgeon, 71, of Brownstown, Indiana, passed away Thursday, May 11, 2017, at IU Health University Hospital in Indianapolis, Indiana. Larry was a member of the Brownstown Presbyterian Church, where he had served as Elder and on a variety of church committees. Larry retired after 30 years as Jackson County Chief Probation Officer in 2001. He was owner and funeral director at Spurgeon Funeral Home, Inc. for over 50 years. Larry was active in the community, having belonged to a variety of organizations and committees over the years. He was a member of Washington Lodge #13 F&AM in Brownstown, Jackson County Community Foundation, Brownstown Lions Club, and Indiana Funeral Directors Association. He served as President of the Fairview Cemetery Association and Fairview Cemetery Foundation. As president of the Brownstown Jaycees, he was instrumental in working with the Town Board to establish the Brownstown Parks and Recreation Department. Larry was a volunteer in helping to restore the Royal Theater for the Jackson County Community Theater. While serving as Probation Officer, he helped establish probation programs, including Jackson County Juvenile Home, Volunteers in Probation, the Community Corrections Program, and the juvenile court referee position. He was appointed by Governor Ed Whitcomb to the Citizens Advisory Committee of the Indiana Youth Council. He was presented the Sagamore of the Wabash honor by Jackson Circuit Court Judge Robert R. Brown on behalf of Governor Evan Bayh. Larry also enjoyed woodworking and working in his yard. He enjoyed spending time in the Florida Keys, visiting relatives throughout the country, and spending time with his grandsons. Larry served in the U.S. Air Force on both active and reserve status. Born on August 13, 1945, in Seymour, IN, he was the son of H. Jack and Margaret Terkhorn Spurgeon. On August 20, 1967, in Brownstown, he married Mary Sue Robertson. Besides his wife, he is survived by sons R. Douglas (Suzan) Spurgeon of Memphis, TN, and J. Todd (Joyce) Spurgeon of Sellersburg, IN. Other survivors include a brother, Jack D. (Doris) Spurgeon of Brownstown, IN, and a sister, Sally Jo Bogard of Gahanna, OH. His grandchildren are Chandler Spurgeon of Memphis, TN, and Justin Spurgeon and Will Spurgeon of Sellersburg, IN. Several nieces and nephews and their families also survive. Family members preceding Larry in death were his parents and brother-in-law Lanny Bogard. Funeral services for Larry R. Spurgeon will be conducted at 11:00 a.m. on Monday, May 15, 2017 at the Brownstown Presbyterian Church. Rev. John VanderZee, Rev. Duane Aelick, and Pastor Jack Belk will officiate. Interment will follow at Fairview Cemetery, Brownstown. Visitation for friends will be from 1:00 p.m. to 5:00 p.m. on Sunday, May 14, 2017, at Spurgeon Funeral Home, Inc. in Brownstown and from 10:00 a.m. until the time of the service on Monday, May 15, 2017 at the Brownstown Presbyterian Church. Memorials may be given to the Brownstown Presbyterian Church or the Omer and Jean Terkhorn Scholarship Fund through the Jackson County Community Foundation. Online memorials and condolences may be given at www.spurgeonfh.com

Larry R. Spurgeon, 71, of Brownstown, Indiana, passed away Thursday, May 11, 2017, at IU Health University Hospital in Indianapolis, Indiana. Larry was a member of the Brownstown Presbyterian Church, where he had served as Elder and on a variety... View Obituary & Service Information

The family of Larry R. Spurgeon created this Life Tributes page to make it easy to share your memories.

Send flowers to the Spurgeon family.