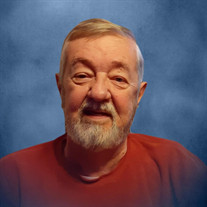 Larry “George” Gene Stuckwisch, age 76, of Tampico, passed away on Wednesday, April 27, 2022, at his home surrounded by his loving family. Mr. Stuckwisch was confirmed at St. John’s Lutheran Church, Sauers, and he has been a member of St. Peter’s Lutheran Church, Brownstown, since 1965. He retired from Cummins Engine Co. after 44 years of service. Larry loved his family, and he especially enjoyed the sporting events of his children and grandchildren. He was known for “Stucky’s Stuff”, as he enjoyed collecting a variety of items, such as glassware, toys, and cars. He loved boating in Kentucky in his cabin cruiser, attending auctions, and he was a member of the Street Rod National Club (NSRA). Born on September 17, 1945, at his home in the Sauers community, he was the son of Paul and Ethel Christopher Stuckwisch, both of whom preceded him in death. On February 2, 2022, he married Kathy Jane Lakins and she survives in Tampico. Survivors also include two sons: Mark Stuckwisch of Seymour, and Troy (Susan) Stuckwisch of Seymour; one step-son, Chadd (Thea) Wehmiller of Commiskey; one step-daughter, Lani (Dennis) McIntosh of Columbus; seven grandchildren: Kelsey (Casey) Popenfoose of Brownsburg, Shane (Hallie) Stuckwisch of Brownstown, Hayden Stuckwisch of Sullivan, Sydney Stuckwisch of Fort Collins, Colorado, Bella Wehmiller of Commiskey, Hunter (Ellyn) McIntosh of Seymour, and Kyler McIntosh of Alabama; and three great-grandchildren: Bane Popenfoose, Carter Stuckwisch, and Beckham McIntosh. Besides his parents, Larry was also preceded in death by one brother, Roger Stuckwisch; sister-in-law, Katherine Stuckwisch; and one sister, Christa Stuckwisch Hobbs. Funeral services for Larry “George” Gene Stuckwisch will be conducted at 12:00 noon on Monday, May 2, 2022, at Spurgeon Funeral Home, Inc., Brownstown, with Pastor Jeffrey Stuckwisch officiating. Friends may call from 10:00 a.m. until the time of the service at 12:00 noon on Monday at the funeral home. Interment will follow at St. Peter’s Lutheran Church Cemetery, Brownstown. Memorials may be given to St. Peter’s Lutheran Church, Brownstown. Funeral arrangements have been entrusted to the caring staff at Spurgeon Funeral Home, Inc. Online memorials and condolences may be given at www.spurgeonfh.com

The family of Larry "George" Gene Stuckwisch created this Life Tributes page to make it easy to share your memories.