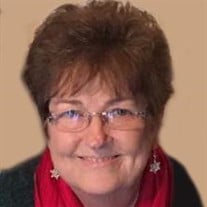 Linda K. Klosterman Schafstall Wischmeier, age 64, of Brownstown, Indiana, passed away at her residence on Saturday, April, 1, 2017 surrounded by her family. She was a member of St. Paul Lutheran Church, Wegan, and was active in the Ladies Aid at the church. Her smile and laughter was contagious and she enjoyed being a faithful servant to all. She loved farming and being a farmer’s wife, as well as cooking for all her family and friends. She was a joy to everyone and was greatly loved and adored by all, because to know her was to love her. Born on April 20, 1952 in Jackson County, Indiana, she was the daughter of Victor and Melba Hackman Klosterman. Her father preceded her in death on October 30, 2000, and her mother survives in Seymour. She married Jack E. Schafstall on August 21, 1971 and he preceded her in death on November 29, 1986. She then married Waldo L. Wischmeier on August 29, 1992 and he also preceded her in death on May 14, 2015. Survivors include two daughters: Beth (Stephen) Wischmeier of Seymour and Connie (Jeffrey) Stahl of Brownstown; three sons: Douglas (Sue) Wischmeier of Vallonia, Gregory (Lisa) Wischmeier and Max (Barbara) Wischmeier both of Brownstown; grandchildren: Britney, Jack and Craig Wischmeier, Levi and Adam Stahl, Hilary (Mike) Strefling, Blaine Wischmeier, Lindsey (Clint) Sterling, Kyle Wischmeier, Peyton Wischmeier, Crystal (Bryce) Purcell and Lucas (Kara) Wehmiller; four great-grandchildren: Grayson Strefling, and Madison, Paxton and Phinnley Purcell; two brothers, Allen (Janet) Klosterman and Leon (Kay) Klosterman, both of Seymour; two sisters, Lois (Henry) Wischmeier of Columbus and Rhonda (David) Eggersman of Seymour; brothers-in-law and sisters-in law: Tony (Cathy) Schafstall of Seymour, Marvin (Norma) Wischmeier and Marilyn (Robert) Benter all of Brownstown, Milton (Jane) Stuckwisch of Seymour, several aunts, uncles, nieces, and and nephews. She was also preceded in death by brothers-in-law and sisters-in-law: Leroy and Erma Wischmeier, Noble and Melba Wischmeier, Alvin and Ruth Wischmeier, and Hugo and Maysel Thomas. Funeral services will be conducted at 10:00 AM on Wednesday, April 5, 2017 at St. Paul Lutheran Church, Wegan, with Pastor Martin Keller officiating. Friends may call from 4:00 PM to 8:00 PM on Tuesday, April 4, 2017, at Spurgeon Funeral Home, Inc., Brownstown, and from 9:00 AM until the time of the service on Wednesday, April 5, 2017, at St. Paul Lutheran Church, Wegan. Burial will follow at St. Paul Lutheran Church, Borchers Cemetery, Seymour. Memorials may be given to St. Paul Lutheran Church, Wegan; Lutheran Central School, Trinity Lutheran High School, and Schneck Hospice.

Linda K. Klosterman Schafstall Wischmeier, age 64, of Brownstown, Indiana, passed away at her residence on Saturday, April, 1, 2017 surrounded by her family. She was a member of St. Paul Lutheran Church, Wegan, and was active in the Ladies... View Obituary & Service Information

The family of Linda K Wischmeier created this Life Tributes page to make it easy to share your memories.