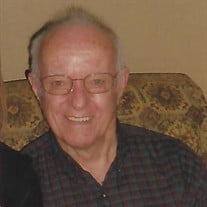 Lloyd Edwin Kiewit, age 89, of Brownstown, passed away on Sunday, April 29, 2018, at Hoosier Christian Village, surrounded by his family. Mr. Kiewit was a member of St. Peter’s Lutheran Church, Brownstown, where he served as Elder and Cemetery Board member. He served in the United States Army from 1950 to 1952 and was a member of the American Legion. He was one of the original builders of Lutheran Central School in Brownstown, and was a life-long carpenter, working for Noble Stuckwisch, Wayman Brothers, and Abraham & Sons. Mr. Kiewit was also a custodian at Lutheran Central School for numerous years. Lloyd was a quiet, patient man. He was a perfectionist, never complaining, but always encouraging people and striving to help anyone in need. Born on September 17, 1928, at his home in Crothersville, he was the son of George and Mary Horst Kiewit, both of whom preceded him in death. On August 26, 1956, at St. John’s Lutheran Church, Sauers, he married Marilyn Janiel Eggersman, and she survives in Brownstown. Survivors also include two sons: Mark (Janet) Kiewit and Scott Patrick Kiewit, both of Brownstown; two daughters: Sue Ann Prajzner and Stacey Elizabeth (John) McMahon, both of Brownstown; one brother, Lowell Edward Kiewit; one sister, Ruth Dauby of West Lafayette; five grandchildren: Amanda (Brandon) Ritter, Andrew (Stephanie) Prajzner, Kaylee Kiewit, Dylan Kiewit and Isabelle Kiewit; two step-grandchildren: Danielle Day Lynch and Austin McMahon; and two great grandchildren: Hunter Trueblood and Kasen Lynch. Besides his parents, he was also preceded in death by an infant brother; son-in-law, James Prajzner; brother-in-law, Bernard Dauby; and grandson, Parker McMahon. Funeral services for Lloyd Edwin Kiewit will be conducted at 11:00 a.m. on Thursday, May 3, 2018, at St. Peter’s Lutheran Church, Brownstown, with Pastor Jeremy Yeadon officiating. Friends may call from 4:00 p.m. to 8:00 p.m. on Wednesday, May 2, 2018 at Spurgeon Funeral Home, Inc., Brownstown, and from 10:00 a.m. until the time of the service on Thursday at St. Peter’s Lutheran Church, Brownstown. Interment will be at St. Peter’s Lutheran Church Cemetery, Brownstown. Military honors will be presented by Veterans of Foreign Wars Post 1925, American Legion Post 89, Disabled American Veterans 47 and Vietnam Vets 7. Memorials may be given to Hoosier Christian Village Auxiliary or St. Peter’s Lutheran Church, Brownstown. Online memorials and condolences may be given at www.spurgeonfh.com

Lloyd Edwin Kiewit, age 89, of Brownstown, passed away on Sunday, April 29, 2018, at Hoosier Christian Village, surrounded by his family. Mr. Kiewit was a member of St. Peter&#8217;s Lutheran Church, Brownstown, where he served as Elder... View Obituary & Service Information

The family of Lloyd Edwin Kiewit created this Life Tributes page to make it easy to share your memories.

Lloyd Edwin Kiewit, age 89, of Brownstown, passed away on Sunday,...

Send flowers to the Kiewit family.