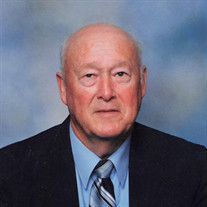 Louis Edmond Fleetwood, age 89, of Seymour, passed away on Friday, February 18, 2022, at Lutheran Community Home, Seymour, surrounded by his loving family. Mr. Fleetwood was a member of Surprise Christian Church since 1942, where he served as Elder for 63 years and Building Fund Treasurer for 60 years. He was also Trustee of the church for numerous years, including the building of the current church in 1963, and he served as Chairman of the Jackson County Christian Churches Association. Louis lived in Surprise, attended grade school at Surprise School, and attended Cortland High School, graduating in 1951. He played basketball all four years during high school. Mr. Fleetwood worked in five local automotive repair shops from 1951 to 1956. From 1956 to 1978, he owned and operated Fleetwood Grocery, including operating a peddler truck and delivering groceries to local customers throughout the county three times per week during that time frame. He was a bus driver for the Seymour Community School Corporation from 1985 to 2011. During his bus driving career, Mr. Fleetwood was known for giving $2 bills as Christmas gifts to his bus riders. Louis was also a farmer from 1963 to 2013, retiring in 2013 after 50 years of farming. After his wife, Dorothy, retired, they enjoyed attending their grandchildren’s sporting events, and traveling during the summer months to Kansas and Canada to visit family. Louis continued to stay active around the farm after his retirement, and he was always known to be working on a long list of projects. Louis was active in the community by serving as the Hamilton Township representative to the ASC Program, serving as President twice for the Cortland High School Alumni Association, and participating on the scholarship committee for numerous years. In addition, he served as Hamilton Township Trustee for four years. Born on May 19, 1932, in Acme, he was the son of Elmo and Mabel Salyers Fleetwood, both of whom preceded him in death. On May 22, 1955, at Immanuel Lutheran Church, Seymour, he married Dorothy Ruth Otte, and she preceded him in death on December 17, 2019. Survivors include three sons: Daniel (Betsy) Fleetwood of Brentwood, Tennessee, Michael (Ardith) Fleetwood of Seymour, and Jonathan (Mary) Fleetwood of Blythewood, South Carolina; grandchildren: Aaron (Ellen) Fleetwood, Zachary (Ansley) Fleetwood, Nathan Fleetwood, Holden Fleetwood, Lauren Fleetwood, Harrison Fleetwood, Sarah Fleetwood, and Jacob Fleetwood; great-grandchildren: Luke Fleetwood, Eliza Fleetwood, and Evelyn Fleetwood; and sisters-in-law: Barbara Otte and Lois Rust. Mr. Fleetwood was also preceded in death by one sister, Mary; and three brothers: Jewel, Gerald and Edmond. Funeral services for Louis Edmond Fleetwood will be conducted at 11:00 a.m. on Monday, February 21, 2022, at Surprise Christian Church with Pastor Rick Grant officiating. Friends may call from 2:00 p.m. to 6:00 p.m. on Sunday, February 20, 2022, at Spurgeon Funeral Home, Inc., Brownstown, and from 10:00 a.m. until the time of the service at 11:00 a.m. on Monday, February 21, 2022, at Surprise Christian Church. Interment will be at Acme Cemetery. Memorials may be given to Surprise Christian Church Building Fund, and Hamilton Township Scholarship Fund. Funeral arrangements have been entrusted to the caring staff at Spurgeon Funeral Home, Inc. Online memorials and condolences may be given at www.spurgeonfh.com

Louis Edmond Fleetwood, age 89, of Seymour, passed away on Friday, February 18, 2022, at Lutheran Community Home, Seymour, surrounded by his loving family. Mr. Fleetwood was a member of Surprise Christian Church since 1942, where he served as... View Obituary & Service Information

The family of Louis Edmond Fleetwood created this Life Tributes page to make it easy to share your memories.

Louis Edmond Fleetwood, age 89, of Seymour, passed away on Friday,...

Send flowers to the Fleetwood family.