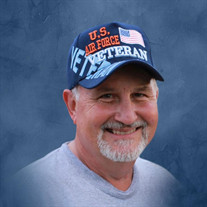 Marcus Lee Garrett, age 61, of Brownstown, passed away on Thursday, September 30, 2020, at Methodist Hospital, Indianapolis, surrounded by his family. Mr. Garrett was a life-time member of Brownstown Christian Church. He served as a Captain in the United States Air Force for 13 years. In addition, he worked as an electrical engineer at Valeo for more than 20 years. Marcus loved spending time with his family, especially his grandchildren. He was proud to be a Veteran, and enjoyed being outside, hunting, fishing, golfing and bowling. He was a member of the American Legion and the Fraternal Order of Eagles. Born on May 9, 1959, in Columbus, he was the son of William “Jerry” and Gloria “Joy” Baughman Garrett. His father preceded him in death and his mother survives in Brownstown. On June 20, 1980, in Wichita Falls, Texas, he married Wanda Jayne Reynolds and she survives in Brownstown. Survivors also include one son, Jerad Garrett of Brownstown; one daughter, Leah McPike of Brownstown; three sisters: Susan Underwood of Seymour, Debra Hamilton of Brownstown and Bethany (C.W.) Pyle of Arkansas; and two grandchildren: Annaleise Pichardo and Emmett McPike. Besides his father, he was also preceded in death by a sister, Marcy Garrett. Funeral services for Marcus Lee Garrett will be conducted at 11:00 a.m. on Monday, October 5, 2020, at Brownstown Christian Church with Doug Pogue officiating. Friends may call from 3:00 p.m. to 7:00 p.m. on Sunday, October 4, 2020, at Brownstown Christian Church and from 10:00 a.m. until the time of the service on Monday, October 5, 2020, at Brownstown Christian Church. Due to the Covid 19 Pandemic, Spurgeon Funeral Home, Inc. will be practicing social distancing according to CDC guidelines. Masks are required when entering the church. Military honors will be presented by Veterans of Foreign Wars Post 1925, American Legion Post 89, Disabled American Veterans 47 and Vietnam Vets 7. Interment will be at Smallwood Cemetery, Brownstown. Memorials may be given to the American Diabetes Association, Smallwood Cemetery or Donor’s Choice. Online memorials and condolences may be given at www.spurgeonfh.com

Marcus Lee Garrett, age 61, of Brownstown, passed away on Thursday, September 30, 2020, at Methodist Hospital, Indianapolis, surrounded by his family. Mr. Garrett was a life-time member of Brownstown Christian Church. He served as a Captain... View Obituary & Service Information

The family of Marcus Lee Garrett created this Life Tributes page to make it easy to share your memories.

Marcus Lee Garrett, age 61, of Brownstown, passed away on Thursday,...

Send flowers to the Garrett family.