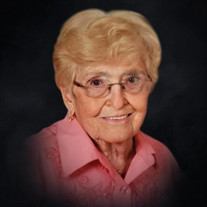 Marilyn E. Teipen Harlow, age 88, of Seymour, passed away on March 9, 2021, following an automobile accident in Florida. Mrs. Harlow was a member of Emanuel Lutheran Church in Dudleytown, Lake Wales Lutheran Church in Lake Wales, Florida, and the DAR. Marilyn was a farm wife for many years cooking three meals a day. She also worked at the Crothersville Shoe Factory and Osram Sylvania for many years. Born on September 27, 1932, in Parke County, Rockville, Indiana, Marilyn was the daughter of David and Flora VanHuss, both of whom preceded her in death. On May 12, 1950, she married George “Bill” Teipen and he preceded her in death on March 23, 2002. On September 27, 2003, she married George Harlow and he preceded her in death on September 2, 2005. Survivors include one daughter, Cheryl (Ron) Million of Franklin; one son, Eric Teipen of Frostproof, Florida; daughter-in-law, Janice Teipen of Seymour; one sister, Phyllis Holbert of Sebring, Florida; five grandchildren: Scott (Stephanie) Teipen of Crothersville, Christopher (April) Darlage of Crothersville, Sharon (Drew) Markel of Brownstown, Elizabeth Darlage of Indianapolis, and Braden Teipen of Frostproof, Florida; seven great-grandchildren: Carson Darlage, Addison Darlage, Brody Teipen, Brailey Teipen, Isaiah Markel, Kinsley Markel, and Kasen Markel. Marilyn was also preceded in death by one son, Phillip Teipen; and three sisters. A Memorial Service for Marilyn E. Teipen Harlow will be conducted at 11:00 a.m. on Saturday, April 24, 2021, at Emanuel Lutheran Church, Dudleytown. Friends may call from 9:00 a.m. until the time of the service at 11:00 a.m. on Saturday, April 24, 2021, at Emanuel Lutheran Church, Dudleytown. Memorials may be given to Emmanuel Lutheran Church, Dudleytown, or Lake Wales Lutheran Church in care of Spurgeon Funeral Home, Inc. Arrangements are being handled by Spurgeon Funeral Home, Inc., Brownstown. Online memorials and condolences may be given at www.spurgeonfh.com

The family of Marilyn E. Teipen Harlow created this Life Tributes page to make it easy to share your memories.