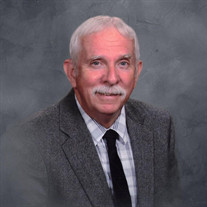 Michael R. Holle, age 72, of Seymour, passed away on Sunday, January 17, 2021, at Schneck Medical Center, Seymour. Mr. Holle loved the Lord and his church, St. John’s Lutheran Church, Sauers. He was a member of the Sauers Men’s Club, helped with funeral dinners at the church, and he also cleaned the church. Mike was baptized at Immanuel Lutheran Church, Seymour, on January 2, 1949, with his sponsors being Virgil Holle and Clarence Wessel. He was confirmed on April 7, 1963, at St. John’s Lutheran Church, Sauers. His confirmation verse was Psalm 27:1 - The Lord is my Light and my Salvation; whom shall I fear? The Lord is the strength of my life; of whom shall I be afraid.” Mike graduated from Seymour High School in 1967 and attended Nashville Auto Diesel School in Nashville, Tennessee. He was a member of the United States Air Force Reserves from 1969 to 1975. He began his employment with Cummins Engine Company on October 8, 1969, and he retired on March 1, 2009. Mike loved spending time with his family, especially his grandchildren, and giving them rides on the golfcart. He also loved traveling with his wife, Debbie, traveling to all 50 states and several countries. Mike was also a past member of the Star Promenader’s Square Dance Club. Born on December 10, 1948, in Jackson County, Mike was the son of Elmer and Martha Wessel Holle, both of whom preceded him in death. On August 28, 1971, at St. John’s Lutheran Church, Sauers, he married Deborah Colleen Richardson and she survives in Seymour. Survivors also include two sons: Terry (Tina) Holle of Seymour, and Ryan (Arisa) Holle of Seymour; goddaughter, Alison (Rieckers) Zollinger (Greg) of Charlestown; one brother, Allan (Susie) Holle of Seymour; eight grandchildren: Lacie (Caleb Cowles) Holle, Isaac Holle, Lydia Holle, Jenna Holle, Leo Holle, Khai Holle, George Zollinger and Layne Zollinger; two great-grandchildren: Spencer Henderson and Connor Cowles; mother-in-law, Marjory Richardson of Brownstown; and several nieces and nephews. Mr. Holle was also preceded in death by a sister, Bertha Carol Holle. Funeral services for Michael R. Holle will be conducted at 12:00 noon on Thursday, January 21, 2021, at St. John’s Lutheran Church, Sauers, with Pastor Craig Muhlbach officiating. Friends may call from 10:00 a.m. until the time of the service at 12:00 noon on Thursday at St. John’s Lutheran Church, Sauers. Due to the Covid 19 Pandemic, Spurgeon Funeral Home, Inc. will be practicing social distancing according to CDC guidelines. Masks are required when entering the church. Attendance is limited to 25 people in the church at one time. Interment will be at St. John’s Lutheran Church, Sauers Cemetery. Memorials may be given to St. John’s Lutheran Church, Sauers Expansion Fund. Online memorials and condolences may be given at www.spurgeonfh.com

The family of Michael R. Holle created this Life Tributes page to make it easy to share your memories.

Send flowers to the Holle family.