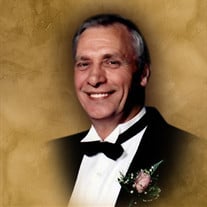 Millard Maxie, age 84, of Crothersville, passed away on Thursday, August 15, 2019, at Lutheran Community Home, Seymour. Mr. Maxie was a life-time member of Green Briar Presbyterian Church. He worked for the State Highway in Clay County, Kentucky, and worked for more than 35 years at Robertson Feed Mill. He was also a tobacco farmer for ten years. Millard loved spending time with his family, gardening, growing beautiful flowers, and watching the races at Brownstown Speedway Born on September 2, 1934, in Manchester, Kentucky, he was the son of Harve and Lilly Eagle Maxie, both of whom preceded him in death. On October 15, 1953, in Clay County, Kentucky, he married Martha Mae Edwards and she preceded him in death. Survivors include one son, Doug (Dee) Maxie of Dudleytown; two daughters: Patricia Ridgway of Harrodsburg, Kentucky, and Rebecca Smallwood of Seymour; 11 grandchildren: Michael (Mahala) Maxie, Mitchell Maxie (Maranda Morgan), Melissa Maxie (Jacob Wagner), Mark (Alison) Maxie, Jeremy (Tonya) Hagen, Jeff (Pam) Hagen, James (Mallory) Ridgway, Noah Smallwood, Derek Smallwood, Riley Dover, and Jennifer Speck; and ten great-grandchildren. Besides his parents, he was also preceded in death by his mother-in-law and father-in-law, Jim and June Edwards, and son-in-law, John Ridgway. Funeral services for Millard Maxie will be conducted at 11:00 A.M. on Tuesday, August 20, 2019, at Spurgeon Funeral Home, Inc., Brownstown, with David Schill officiating. Friends may call from 4:00 P.M to 8 P.M. on Monday, August 19, 2019, at Spurgeon Funeral Home, Inc., and from 10:00 A.M. until the time of the service on Tuesday at the funeral home. Interment will follow at Crothersville Cemetery. Memorials may be given to St. John’s Lutheran Church, Sauers, or Our Hospice of South Central Indiana. Online memorials and condolences may be given at www.spurgeonfh.com

The family of Millard Maxie created this Life Tributes page to make it easy to share your memories.

Millard Maxie, age 84, of Crothersville, passed away on Thursday,...

Send flowers to the Maxie family.