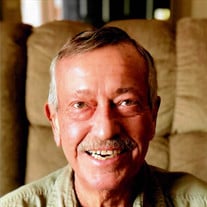 Nelson “Nick” Wayne Sterling, Sr., age 73, of Seymour, passed away on Saturday, July 6, 2019, at Our Hospice of South Central Indiana, Columbus. Nick was of the Lutheran faith. He was a truck driver for 27 years, former owner of Sterling Garage Doors and the Cozy Lounge in Columbus, and also drove cars for Bob Poynter’s automotive business. He loved motorcycle racing, playing golf, woodworking, and cooking ribs and fried potatoes. He also loved his chocolate Lab dog, Bentley. Nick was loved by his neighbors and friends for always lending a helping hand. Nick was a member of the Moose Lodge and the Elks Lodge of Columbus. Born on December 4, 1945, in Brownstown, he was the son of Clifford and Dorothy Robbins Sterling, both of whom preceded him in death. On May 30, 2009, in Brownstown, he married Karen Elaine Murray and she survives in Seymour. Survivors also include one son, Nelson “Nick” Wayne Sterling, Jr. of Columbus; one brother, Lloyd (Jeanette) Sterling of Brownstown; two sisters: Thelma Kiser and Catherine Sterling, both of Brownstown; and two grandchildren: Christa Nicole Sterling and Erica Leigh (fiancé Evan Daily) Sterling. Nick was also preceded in death by his first wife, Donna Sterling; two brothers: George Sterling and Robert Sterling; and two sisters: Lottie Brown and Nan Zollman. Funeral services for Nelson “Nick” Wayne Sterling, Sr. will be conducted at 11:00 a.m. on Wednesday, July 10, 2019, at Spurgeon Funeral Home, Inc., Brownstown, with Pastor Jeremy Yeadon officiating and special remarks by Clint Waskom. Friends may call from 4:00 p.m. to 8:00 p.m. on Tuesday, July 9, 2019, at Spurgeon Funeral Home, Inc., and from 10:00 a.m. until the time of the service on Wednesday at the funeral home. Interment will follow at Fairview Cemetery, Brownstown. Memorials may be given to St. Peter’s Lutheran Church, Brownstown, and Our Hospice of South Central Indiana. Online memorials and condolences may be given at www.spurgeonfh.com

The family of Nelson "Nick" Wayne Sterling, Sr. created this Life Tributes page to make it easy to share your memories.