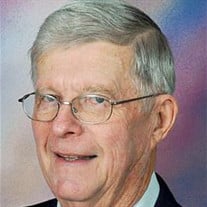 Orville Lubker, Jr., age 86, of Brownstown, Indiana, passed away on Saturday, August 8, 2015 at I.U. Health Methodist Hospital, Indianapolis. He was a member of Brownstown United Methodist Church and served in the United States Army from 1952 - 1954 during the Korean War. Orville was the owner of Lubker Farm Market and worked in the school system for 34 years as a teacher at Tampico School and Crothersville Schools and a guidance counselor at Brownstown Central High School. Born on August 7, 1929, in Brownstown, he was the son of Orville Lubker, Sr. and Lottie Berry Lubker, both of whom preceded him in death. On December 25, 1957, he married Laura Rose Burcham and she survives in Brownstown. Survivors also include one son, Jeff (Rachel) Lubker of Brownstown; two daughters, Rise (Dave) Creasey of Brownsburg, and Sharon (Tom) Smith of Lafayette; eight grandchildren, Caitlin Smith, Stuart Creasey, Alicia Smith, Ben Smith, Hannah Smith, Lindsey Montgomery, Jonathan Keith and Jacob Keith; and two great grandchildren, Levi and Asher. In addition to both parents, he was also preceded in death by three brothers, Robert, John and Howard; and one sister, Ava Merl Benter. Funeral services will be conducted at 11:00 a.m. on Wednesday, August 12, 2015 at Brownstown United Methodist Church with Pastor Kevin Stiles officiating. Friends may call from 4:00 p.m. to 8:00 p.m. on Tuesday, August 11, 2015 at Spurgeon Funeral Home, Inc., Brownstown, and from 10:00 a.m. until the time of service on Wednesday, August 12, 2015 at Brownstown United Methodist Church. Burial will be at Fairview Cemetery, Brownstown. Military honors will be presented by Veterans of Foreign Wars Post 1925, American Legion Post 89, Disabled American Veterans 47 and Vietnam Vets 7. Memorials may be given to Orville and Laura Lubker Purdue University Scholarship Fund or Brownstown United Methodist Church. Online memorials and condolences may be given at www.spurgeonfh.com

Orville Lubker, Jr., age 86, of Brownstown, Indiana, passed away on Saturday, August 8, 2015 at I.U. Health Methodist Hospital, Indianapolis. He was a member of Brownstown United Methodist Church and served in the United States Army from 1952... View Obituary & Service Information

The family of Orville Lubker Jr. created this Life Tributes page to make it easy to share your memories.

Send flowers to the Lubker family.