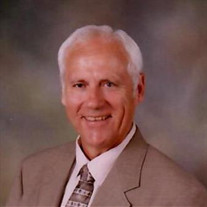 Pastor Gary Lynn Morning, age 81, of Brownstown, passed away on Friday, October 11, 2019, at Franciscan Health, Indianapolis. Pastor Morning was a member of Memphis Community Church. Gary was a graduate of Ozark Christian College in Joplin, Missouri. He attended Oklahoma A & M in Miami, Oklahoma, the University of Arkansas in Monticello, Arkansas, and received his Master’s Degree from Louisville Bible College. Gary loved the Lord. He served churches throughout Oklahoma, Arkansas, Illinois, and Indiana. He was a minister for 61 years, including 22 years of ministering at Brownstown Christian Church. Gary was a member of Lions Club for many years, Brownstown Exchange Club, and also a member of the American Legion. He served 8 years active duty and reserve duty in the U.S. Army at Ft. Leonard Wood in Missouri. Gary was known for his quick wit, infectious smile, and he never met a stranger. When Gary walked in a room, he commanded presence. He loved spending time with his family and friends, calling on church members, and watching all Brownstown sports. Born on December 5, 1937, in Petersburg, Knox County, Indiana, he was the son of Linzy Herman and Edith Cates Morning, both of whom preceded him in death. On August 28, 1958, he married Janet Lindstedt and she survives currently in Camby. Survivors also include two sons: Jeff Morning of Brownstown, and Doug (Sheryl) Morning of Indianapolis; one brother, Lannie (Lou) Morning of Morrisville; four grandchildren; five great-grandchildren; several cousins, nieces, nephews, and a host of friends. All were loved by Gary. Besides his parents, he was also preceded in death by a brother, Jerry Morning. Funeral services for Pastor Gary Lynn Morning will be conducted at 12:00 noon on Wednesday, October 16, 2019, at Brownstown Christian Church with Stan Thomas officiating. Friends may call from 10:00 a.m. until the time of the service at 12:00 noon on Wednesday, October 16, 2019, at Brownstown Christian Church. Interment will follow at Walnut Hills Cemetery, Petersburg. Memorials may be given to Memphis Community Church. Online memorials and condolences may be given at www.spurgeonfh.com

The family of Pastor Gary Lynn Morning created this Life Tributes page to make it easy to share your memories.

Send flowers to the Morning family.