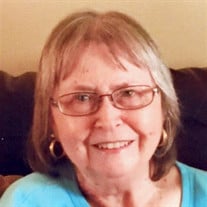 Patricia A. Chase, age 64, of Brownstown, passed away on Sunday, February 18, 2018, at Hoosier Christian Village, Brownstown. Patty attended Brownstown Christian Church and was a graduate of Brownstown Central High School. She was also a graduate of Ball State University, where she received a degree in Elementary Education, and a graduate of Indiana University, where she received a Master's Degree in Education. Patty taught school for 20 years, teaching in the Brownstown school district and also in Florida. She was a member of the Seymour Order of Eastern Star and loved her dog, Skipper. Born on November 14, 1953, in Batesville, Indiana, she was the daughter of Paul Chase, and Marian Cheek Holloway. Her father survives in Aurora and her mother survives in Brownstown. Survivors also include three brothers: Kenneth (Lori) Holloway of Columbus; Mike (Reva) Holloway of Kokomo; and Pat Holloway of Brownstown; one sister, Barbara Marion of Michigan; one step-brother, Fredrick Nelson; and two step-sisters: Jackie Grivie, and Geraldine Goodpaster; and several nieces and nephews. Patty was preceded in death by one sister, Bonnie Bolton. Funeral services for Patricia A. Chase will be conducted at 11:00 a.m. on Thursday, February 22, 2018, at Spurgeon Funeral Home, Inc., Brownstown, with Doug Pogue officiating. Friends may call from 4:00 p.m. to 7:00 p.m. on Wednesday, February 21, 2018, at Spurgeon Funeral Home, Inc. and from 10:00 a.m. until the time of the service on Thursday at the funeral home. Interment will be at Fairview Cemetery, Brownstown. Memorials may be given to the Brownstown Christian Church and Don & Dana Myers Cancer Center. Online memorials and condolences may be given at [email protected]" title="Click to open in a new window or tab" target="_blank" rel="nofollow noopener">[email protected]

Patricia A. Chase, age 64, of Brownstown, passed away on Sunday, February 18, 2018, at Hoosier Christian Village, Brownstown. Patty attended Brownstown Christian Church and was a graduate of Brownstown Central High School. She was... View Obituary & Service Information

The family of Patricia A. Chase created this Life Tributes page to make it easy to share your memories.

Patricia A. Chase, age 64, of Brownstown, passed away on Sunday,...

Send flowers to the Chase family.