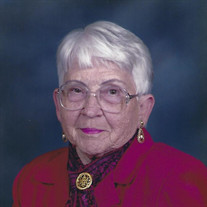 Patricia J. Forgey, age 86, of Brownstown, Indiana, passed away on Tuesday, March 7, 2017 at St. Francis Hospital, Greenwood, surrounded by her family. Mrs. Forgey was a member of the Brownstown United Methodist Church, BPO, Elks Auxiliary and the American Legion Auxiliary. She graduated from Indiana Business College and was employed with Dr. Lyman Overshiner, Reeves Pulley Company and Arvin Industries in Columbus. In addition, she and her husband owned and operated Jackson County Title and Abstract. Mrs. Forgey also worked for the Town of Brownstown from 1975 to 1998. She was appointed Clerk-Treasurer of Brownstown in 1981 and served in that position until she retired in December, 1998. Born on July 31, 1930 in Brownstown, she was the daughter of Herbert E. and Avis L. Oathout Bultman, both of whom preceded her in death. On August 11, 1951, in Brownstown, she married Alfred Lowell “Peck” Forgey and he preceded her in death on August 23, 1989. Survivors include one son, William Randall (Lori) Forgey of Indianapolis; one daughter, Angela Diane Fimreite of McCordsville; one brother, Herbert Bultman, Jr. of Cape Coral, Florida; and two grandchildren, Luke Riley Fimreite of McCordsville, and Meghan Elizabeth Forgey of Indianapolis. Funeral services will be conducted at 11:00 a.m. on Monday, March 13, 2017 at Brownstown United Methodist Church with Kevin Stiles officiating. Friends may call from 4:00 p.m. to 7:00 p.m. on Sunday, March 12, 2017 at Spurgeon Funeral Home, Inc., Brownstown, and from 10:00 a.m. until the time of the service on Monday at the church. Interment will be at Fairview Cemetery, Brownstown. Memorials may be given to Brownstown United Methodist Church or Donor’s Choice. Online memorials and condolences may be given at [email protected]" title="Click to open in a new window or tab" target="_blank" rel="nofollow noopener">[email protected]

The family of Patricia J. Forgey created this Life Tributes page to make it easy to share your memories.

Send flowers to the Forgey family.