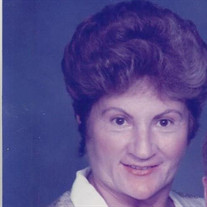 Patricia Rose “Pat” Schwein, age 86, of Brownstown, Indiana, a devoted wife and mother, went to be with the Lord on Tuesday, January 3, 2017. She was surrounded by her loving sons and her best friend, Jeannie Salyer, at Schneck Medical Center, Seymour. Pat will be remembered by those who knew her as their telephone operator and as one who always had a kind word and smile and contagious personality. She never knew a stranger. Mrs. Schwein was a member of the Brownstown Christian Church. She retired from United Telephone in Florida and Indiana Telephone Co. in Brownstown after a total of 45 years of service. Born on January 19, 1930, in Jackson County, Indiana, she was the daughter of Claude and Rosa Lane Shelton Allman, both of whom preceded her in death. On April 17, 1948, in Washington, Indiana, she married Billy Joe Schwein and he preceded her in death on December 14, 2006. Survivors include two sons: Stephan (Kathryn) Schwein of Oxford, Ohio; and David Schwein of Fort Myers, Florida; one sister, Emma Lou Eaton of Brownstown; five grandchildren: Brian Schwein, Jason Schwein, Christopher Schwein, Alison Schwein Fitzgerald, and Lindsey Schwein; and three great grandchildren: Carley Colglazier, Natalie Fitzgerald and Victoria Fitzgerald. She was also preceded in death by a daughter-in-law, Dana Schwein, and one brother, Claude Allman, Jr. Funeral services will be conducted at 1:00 p.m. on Friday, January 6, 2017 at Spurgeon Funeral Home, Inc., Brownstown, with Gary Morning officiating. Friends may call from 11:00 a.m. until the time of the service on Friday at the funeral home. Memorials may be given to Brownstown Christian Church. Online memorials and condolences may be given at [email protected]" title="Click to open in a new window or tab" target="_blank" rel="nofollow noopener">[email protected]

Patricia Rose &#8220;Pat&#8221; Schwein, age 86, of Brownstown, Indiana, a devoted wife and mother, went to be with the Lord on Tuesday, January 3, 2017. She was surrounded by her loving sons and her best friend, Jeannie Salyer, at... View Obituary & Service Information

The family of Patricia Rose "Pat" Schwein created this Life Tributes page to make it easy to share your memories.

Send flowers to the Schwein family.