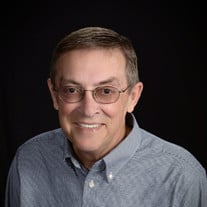 Phillip Dale Darlage, age 68, of Brownstown, Indiana, passed away on Thursday, June 4, 2015 at his residence with his loving family by his side. Born on June 15, 1946, in Seymour, Indiana, he was the son of Henry A. Darlage and Cordelia Kirby, both of whom preceded him in death. He married Brenda S. (Ward) Darlage on February 10, 1973 in Brownstown, Indiana, and she survives in Brownstown. Mr. Darlage was an active member of Brownstown Christian Church where he served as an Elder as well as a Sunday School teacher. He served in the United States Airforce from 1966 to 1970 and was a member of the Knights of Pythias. He spent the latter part of his career working for Communications Products Incorporated (CPI) as a contractor for over 18 years. Mr. Darlage ended his career as the senior Telecom Network Manager retiring on March 31st of this year. His hobbies include watching NASCAR and Westerns, fishing, and spending time with his granddaughter Analena. Survivors also include one son, Curtis Darlage of Brownstown; one daughter, Kristina Darlage Anorga (Juan Anorga, Jr.) of Houston, Texas. He also leaves behind one grandchild, Analena Anorga, also of Houston, Texas. In addition to both parents, he was also preceded in death by his brother, Stephen Darlage. Funeral services will be conducted at 11:00 a.m. on Monday, June 8, 2015 at Brownstown Christian Church. Friends may call from 9 a.m. until the time of service on Monday, June 8, 2015 at the church. Burial will be at Fairview Cemetery, Brownstown. Military honors will be presented by Veterans of Foreign Wars Post 1925, American Legion Post 89, Disabled American Veterans 47 and Vietnam Vets 7. Memorials may be given to Brownstown Christian Church. Online memorials and condolences may be given to [email protected]" title="Click to open in a new window or tab" target="_blank" rel="nofollow noopener">[email protected]

Phillip Dale Darlage, age 68, of Brownstown, Indiana, passed away on Thursday, June 4, 2015 at his residence with his loving family by his side. Born on June 15, 1946, in Seymour, Indiana, he was the son of Henry A. Darlage and Cordelia Kirby,... View Obituary & Service Information

The family of Phillip Dale Darlage created this Life Tributes page to make it easy to share your memories.

Send flowers to the Darlage family.