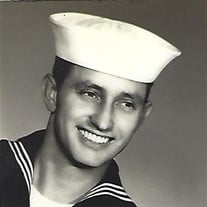 Pryor Curtis (Lester) Ward, age 88, of Brownstown, passed away on Sunday, October 8, 2017 at Hoosier Christian Village, Brownstown. Mr. Ward was a retired Master Chief of the United States Navy and a member of the American Legion Post 89 and VFW Post 1925. He was the lead singer in country bands for many years and was a singer/songwriter since his youth. He loved his family and enjoyed spending time with them. Born on February 20, 1929 in Washburn, Tennessee, he was the son of Pryor Clinton Ward and Dullie Jane Majors Ward Hopson, both of whom preceded him in death. He married Nancy B. McCasland Williams and she preceded him in death. Survivors include one son, Wayne C. Ward of Bloomington; two daughters, Stella L. (Larry) Peters of Bloomington and Brenda S. Darlage of Brownstown; four grandchildren: Stacey A. Nelson of Bloomington, Kristina L. (Juan) Anorga of Franklin, Jason W. Peters of Norman and Curtis H. Darlage of Seymour; three great grandchildren: Simon T. Nelson and Molly C. Nelson, both of Bloomington, and Analena D. Anorga of Franklin; and brother-in-law, Evan J. Buster. In addition to his wife, both parents and his stepfather, Roy David Hopson, he was also preceded in death by six sisters: Lucy Hollin, Laura Webb, Hazel Travis, Betty Buster, Faustine (Teeny) Butler and Barthina Ryan. Funeral services for Pryor Curtis (Lester) Ward will be conducted at 1:00 p.m. on Thursday, October 12, 2017 at Spurgeon Funeral Home, Inc., Brownstown, with Doug Pogue officiating. Friends may call from 11:00 a.m. until the time of the service on Thursday at Spurgeon Funeral Home, Inc. Interment will be at Fairview Cemetery, Brownstown. In lieu of flowers, the family requests memorials be given to Hoosier Christian Village, Brownstown, or the American Cancer Society. Online memorials and condolences may be given at www.spurgeonfh.com

The family of Pryor Curtis (Lester) Ward created this Life Tributes page to make it easy to share your memories.

Send flowers to the Ward family.