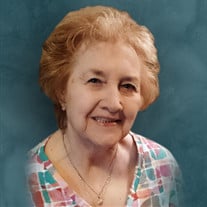 Reva Mae Silence Jackson, age 79, of Brownstown, passed away on Tuesday, February 4, 2020, at her residence. Reva was a member of the Brownstown Church of the Nazarene. Born on August 6, 1940, in Brownstown, she was the daughter of Marvin and... View Obituary & Service Information

The family of Reva Mae Silence Jackson created this Life Tributes page to make it easy to share your memories.