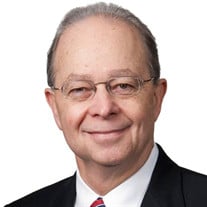 Richard Thomas Mullineaux, age 66, of Floyd Knobs, Indiana, passed away on Sunday, May 26, 2019, at his home surrounded by his loving family and close friends. Mr. Mullineaux was a member of Lincoln Hills Christian Church in Corydon. He devoted much of his time helping disabled persons. At his church, Richard served on the Board for Disability Ministry, which provides group housing for people with brain disabilities. Richard was a Senior Partner with the law firm of Kightlinger & Gray, LLC, in New Albany. He served on the firm’s management committee for 15 years. Throughout his legal career, he demonstrated a passion for mentoring young lawyers. In addition, he taught for several years at the Indiana Trial Advocacy College and was a member of the American Board of Trial Advocates. In 2010, Richard was presented the Indiana State Bar Association Civility Award. He was devoted to his community and was a member of the New Albany Elks Club and One Southern Indiana. Born on July 30, 1952, in Corpus Christi, Texas, he was the son of Thomas Louis and Marytru Scharf Mullineaux, both of whom preceded him in death. On October 21, 1995, at their residence in Floyd Knobs, Indiana, he married Carole R. Randall, and she survives. Survivors also include three daughters: Jennifer Ashley (Edwin) Stutzman of New Albany; Brianne Mullineaux Adams of Rocky Point, North Carolina; and Candace Mullineaux (Brian) Caldwell of Oxford, Alabama; one son, Nicolas Lanzillo of Portland, Oregon; one sister, MariLu (Chet) Linderman of Georgetown; and nine grandchildren: Adeline Stutzman, Noah Stutzman, Max Stutzman, Ian Stutzman, Aydan Arreola, Dane Adams, Bryson Adams, Madalyn Mullineaux Ferry, and Harry Caldwell. Besides his parents, he was also preceded in death by one son, Max Thomas Mullineaux. Funeral services for Richard Thomas Mullineaux will be conducted at Lincoln Hills Christian Church, Corydon, on Friday, May 31, 2019, at 2:00 p.m. with Webster Oglesby officiating. Friends may call from 10:00 a.m. until the time of the service at 2:00 p.m. on Friday, May 31, 2019, at Lincoln Hills Christian Church in Corydon. Interment will follow at Kraft Graceland Cemetery, New Albany. Memorials may be given to Trial Advocacy Skills College, or Disability Ministry. Family and friends may express their condolences at www.spurgeonfh.com

Richard Thomas Mullineaux, age 66, of Floyd Knobs, Indiana, passed away on Sunday, May 26, 2019, at his home surrounded by his loving family and close friends. Mr. Mullineaux was a member of Lincoln Hills Christian Church in Corydon. He devoted... View Obituary & Service Information

The family of Richard Thomas Mullineaux created this Life Tributes page to make it easy to share your memories.

Send flowers to the Mullineaux family.