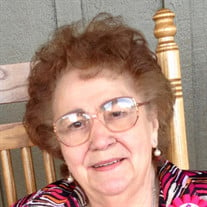 Ruby Jean (Kidd) Powell, age 88, of Seymour, passed away on Tuesday, March 5, 2019, at Covered Bridge Health Campus, Seymour. Ruby was a member of Medora United Methodist Church. She was a quality inspector at Medora Plastic Factory for more than 30 years. She loved raising her children and was passionate about spending time with her family. Ruby also enjoyed cooking and camping. Born on August 18, 1930, in Wayne County, Kentucky, she was the daughter of James and Nettie Mae Reynolds Troxell, both of whom preceded her in death. On October 8, 1945, in Somerset, Kentucky, she married Ottis Kidd and he preceded her in death on November 28, 1984. On April 4, 1998, she married Lemuel Lee Powell and he preceded her in death on January 20, 2009. Survivors include three sons: Tony Kidd of Vallonia, Darryl (Cathy) Kidd of Medora, and Kenneth (Rhonda) Kidd of Memphis; one daughter, Sandra (Warren) Martin of Columbus; one step-daughter, Leta (John) Ahlbrand; one step daughter-in-law, Pam Powell of Seymour; three sisters: Jane (Lowell) Wilson of Illinois, Mary Baker of Indianapolis, and Ina Faye (Charles) Rickenbaugh of English; 16 grandchildren; 30 great-grandchildren; and two great-great grandchildren. Ruby was also preceded in death by a son, Larry Kidd; a step-son, John Powell; a grandson, John Andrew Kidd; a great-grandson, Tanner Hublar; and three brothers: Lee Troxell, Clifford Troxell, and Ernest Ray Troxell. Funeral services for Ruby Jean (Kidd) Powell will be conducted at 1:00 p.m. on Friday, March 8, 2019, at Spurgeon Funeral Home, Inc., Brownstown. Friends may call from 10:00 a.m. until the time of the service at 1:00 p.m. on Friday at Spurgeon Funeral Home, Inc. Interment will follow at Russell Chapel Cemetery. Memorials may be given to Medora United Methodist Church. Online memorials and condolences may be given at www.spurgeonfh.com

The family of Ruby Jean (Kidd) Powell created this Life Tributes page to make it easy to share your memories.